The City of Idaho Springs is a Statutory City which is the most populous municipality in Clear Creek County, Colorado, United States. As of the 2010 census it had a population of 1,717. Idaho Springs is located in Clear Creek Canyon, in the mountains upstream from Golden, some 30 miles (48 km) west of Denver. Local legend is that the name of the city derived from annual visits to the radium hot springs made by a Native American chief and his tribe who journeyed there each year from Idaho to bathe in the magic healing waters.

Founded in 1859 by prospectors during the early days of the Pike's Peak Gold Rush, the town was at the center of the region's mining district throughout the late nineteenth century. The Argo Tunnel drained and provided access to many lodes of ore between Idaho Springs and Central City. During the late twentieth century, the town evolved into a tourist center along U.S. Highway 6 and U.S. Highway 40, which ascend Clear Creek Canyon through the historic mining district.

The town today is squeezed along the north side of Interstate 70, with a historical downtown in the central portion, a strip of tourist-related businesses on its eastern end, and mostly residences on its western end. It also serves as a bedroom community for workers at the Loveland Ski Area farther up the canyon. The town today is the largest community in Clear Creek County, but, for historical reasons, the county seat has remained at Georgetown.

On January 5, 1859, during the Colorado gold rush, prospector George A. Jackson discovered placer gold at the present site of Idaho Springs, where Chicago Creek empties into Clear Creek. It was the first substantial gold discovery in Colorado. Jackson, a Missouri native with experience in the California gold fields, was drawn to the area by clouds of steam rising from some nearby hot springs. Jackson kept his find secret for several months, but after he paid for some supplies with gold dust, others rushed to Jackson's diggings. The location was originally known as "Jackson's Diggings". Once the location became a permanent settlement, it was variously called "Sacramento City", "Idahoe", "Idaho City", and finally "Idaho Springs".

The first placer discoveries were soon followed by discoveries of gold veins in the rocks of the canyon walls on both sides of Clear Creek. Hard rock mining became the mainstay of the town long after the gold-bearing gravels were exhausted.

A strike by Idaho Springs miners demanding the eight-hour day in May 1903 erupted into violence. This was a local struggle in a much broader fight called the Colorado Labor Wars.

The 1969 film Downhill Racer portrayed an alpine ski racer from Idaho Springs, played by Robert Redford; a brief scene was shot on location in Idaho Springs. Several scenes from the comedy film The Overbrook Brothers were filmed here in the spring of 2008. 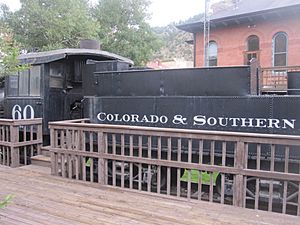 Colorado and Southern Railroad locomotive on exhibit in Idaho Springs

There were 841 households out of which 27.1% had children under the age of 18 living with them, 42.8% were married couples living together, 10.9% had a female householder with no husband present, and 42.3% were non-families. 33.2% of all households were made up of individuals and 8.4% had someone living alone who was 65 years of age or older. The average household size was 2.25 and the average family size was 2.87.

All content from Kiddle encyclopedia articles (including the article images and facts) can be freely used under Attribution-ShareAlike license, unless stated otherwise. Cite this article:
Idaho Springs, Colorado Facts for Kids. Kiddle Encyclopedia.