The historic Town of Georgetown is the Territorial Charter Municipality that is the county seat of Clear Creek County, Colorado, United States. The former silver mining camp along Clear Creek in the Front Range of the Rocky Mountains was established in 1859 during the Pike's Peak Gold Rush. The federally designated Georgetown-Silver Plume Historic District comprises Georgetown, the neighboring town of Silver Plume, and the Georgetown Loop Historic Mining & Railroad Park between the two towns. The town population was 1,034 at the 2010 census. The Georgetown Post Office has the ZIP code 80444.

The town sits at an elevation of 8,530 feet (2,600 m) above sea level, nestled in the mountains near the upper end of the valley of Clear Creek in the mountains west of Denver along Interstate 70. Although a small town today, the town was a historic center of the mining industry in Colorado during the late 19th century, earning the nickname the "Silver Queen of Colorado". It has evolved into a lively historical summer tourist center today with many preserved structures from the heyday of the Colorado Silver Boom. The town stretches roughly north-south along Clear Creek, hemmed in by the mountains, with the historic downtown located at the southern (upper) end and modern development located at the northern (lower) end of town. 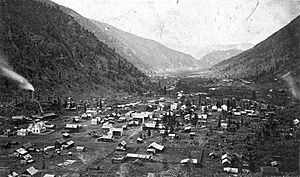 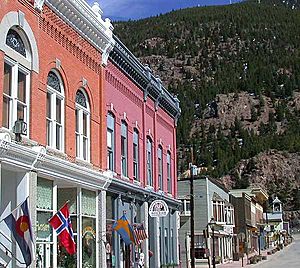 View west along Sixth Street in downtown Georgetown, with the historic Masonic Temple in the foreground. 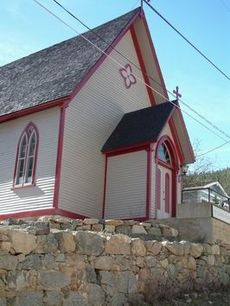 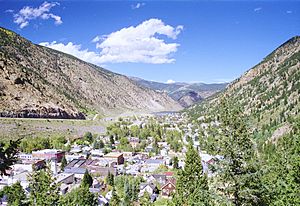 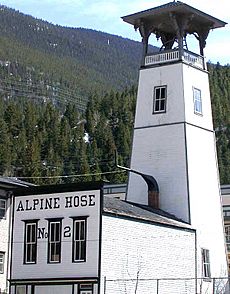 The historic Alpine Hose Firehouse No. 2 in Georgetown 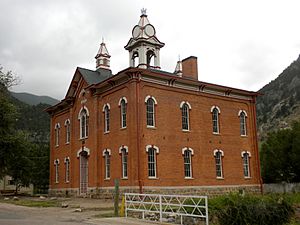 The town was founded in 1859 during the Pike's Peak Gold Rush by George and David Griffith, two prospectors from Kentucky. It was named "Georgetown" in honor of the older of the two brothers. Although founded during the gold rush, the town grew rapidly following the discovery of silver on September 14, 1864, by James Huff at a site approximately 8 miles (13 km) up the canyon in the Argentine Pass area. In the following years, thousands of mines were dug in the mountains surrounding the town and the town quickly grew into a center for prospectors and mine workers in the surrounding mountains. Located in the valley floor, the town itself was not a mining camp but a center of commerce and entertainment for miners in the surrounding mountains.

Georgetown was incorporated on January 10, 1868, and a few months later it wrested the county seat from nearby Idaho Springs, which is a larger community today. The historic courthouse dates from this year. Georgetown is the only Colorado municipality that still operates under a charter from the Territory of Colorado. The building of the narrow gauge Colorado Central Railroad up the canyon from Golden in the 1870s further increased the central position of the town. Although most of the railroad was later removed, a portion remained between the town and Silver Plume and is operated today as a tourist railroad called the Georgetown Loop. The town experienced its greatest growth and prosperity during the Colorado silver boom of the 1880s when it rivaled Leadville to the west as the mining capital of Colorado. At one time, before the collapse of the silver boom in 1893, the town population exceeded 10,000, and a movement arose briefly among local citizens to move the state capital there from Denver.

The frontier gambler, Poker Alice, lived for a time in Georgetown and in several other Colorado communities where she was considered an expert player and dealer.

Following the collapse of the Silver Boom, the town population dwindled. In the 1950s the town began to experience a small renaissance as an après-ski watering hole for the thousands of skiers who passed through the town on their way down from the mountains at the ski areas near Loveland Pass and Guanella Pass. Small craft shops began to set up businesses in the once decrepit 19th century storefronts. By the late 1960s, the establishment of a museum in one of the historic hotels had made the town a popular summer tourist destination where visitors could relive the experience of walking among structures from the mining boom.

The historic downtown was used as the location for the filming of a scene from the 1978 movie Every Which Way But Loose starring Clint Eastwood. The scene features the climactic showdown between Philo Beddoe (Eastwood's character) and the Black Widows motorcycle gang. The town was also used in the 1998 film Phantoms which included the historic Hotel de Paris, as well as the colonial-style post office.

The made-for-TV movie The Christmas Gift, starring John Denver, was filmed in Georgetown in 1986. The film is about a widower and his daughter who go to Georgetown for vacation and business and find the true meaning of Christmas.

Other movies filmed at least partly in Georgetown include the made-for-TV movies "Perry Mason: The Case of the Reckless Romeo, and "Perry Mason: The Case of the Skin Deep Scandal"; and the feature film "Switchback" with Danny Glover and Dennis Quaid; and at least one scene from "The Duchess and the Dirtwater Fox", with Goldie Hawn and George Segal. In addition, it has been the site for various the filming of various commercials, and some music videos, including part of John Tesh's "A Romantic Christmas."

The Sonic Bloom Music Festival takes place every June in Georgetown. It moved to Georgetown in 2011 and features premier electronic artists.

Georgetown is located in the valley of Clear Creek. Interstate 70 and U.S. Route 6 run along the western edge of the town, with access from Exit 228. It is 45 miles (72 km) east to Denver and 22 miles (35 km) west across the Continental Divide to Silverthorne.

There were 503 households out of which 24.1% had children under the age of 18 living with them, 44.1% were married couples living together, 8.3% had a female householder with no husband present, and 44.7% were non-families. 34.6% of all households were made up of individuals and 5.2% had someone living alone who was 65 years of age or older. The average household size was 2.08 and the average family size was 2.67.

All content from Kiddle encyclopedia articles (including the article images and facts) can be freely used under Attribution-ShareAlike license, unless stated otherwise. Cite this article:
Georgetown, Colorado Facts for Kids. Kiddle Encyclopedia.