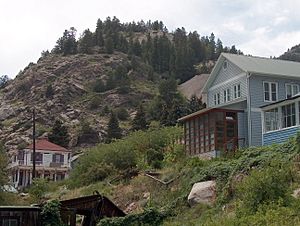 According to the United States Census Bureau, the town of Silver Plume has a total area of 0.2 square miles (0.6 km²), all of it land.

The town of Silver Plume has a very rich history. That history can be viewed by the general public either at the George Rowe Museum, which is in the original school house of the town, or by walking the 7:30 Mine Trail, which gives the individual a grand view of the Silver Plume valley and the town nestled at its base.

Many tales circulate about the town. One involves its naming. According to records and legends, Louis Dupuy (the owner of the Hotel De Paris) was also a newspaper editor for the town. When miners from Silver Plume brought him samples of the town's ore and asked him they should name the small camp, he allegedly wrote a short poem on the spot:

Knights today are miners bold,
Who delve in deep mines' gloom,
To honor men who dig for gold,
For ladies whom their arms enfold,
We'll name the town Silver Plume!

Many other legends abound about the small "Living Ghost Town". One involves a much-beloved citizen from the mining days, Clifford Griffin. According to legend, Mr. Griffin came from the state of New York, where he was raised. Griffin became engaged in New York, but his fiance tragically, and mysteriously, died the night before their wedding. Her death was contributed to unnameable "natural causes", and to escape the painful memories of his beloved, he moved to Colorado with his brother, who eventually became the owner of the 7:30 Mine (so named because their day shift started a generous hour later than the other mines, who started at 6:30 AM). Clifford became the manager of the 7:30, and was much loved by his miners for his kindness. According to local legend, every Christmas he bought all his miners a goose for their families, and every Fourth of July, he paid off every bar between Silver Plume and current-day Bakerville 4 miles (6 km) to the west, so his miners could enjoy their holiday without spending their family's money. Not only did he take care of his miners, every evening he provided him with entertainment as well. Since he could not bear the daily sight of his men with their wives and families after his tragedy, he spent a great deal of time near the entrance to the 7:30, which sits about 1,500 feet (460 m) above the town of Silver Plume. Every evening he would sit near the edge of a nearby cliff and play his violin. Due to the incredible acoustics of the valley, the entire town could step outside and listen to his concerts. According to local legend, one evening, after a particularly beautiful recital, the residents heard a gunshot. Assuming the worst, the miners of the 7:30 raced up the trail to the entrance, and there they found Clifford Griffin, shot through the heart, in a grave he'd dug himself. A note in the nearby Manager's Office told the tale. It asked the residents of Silver Plume to leave him where he lay, because that's where he'd experienced the most happiness since his wife died. Not only did they follow his request, the town erected a 10-foot-tall Gunnison Granite monument in his honor, directly on top of his grave site. The monument can still be seen today, on the cliffs directly in front of the 7:30 Mine.

There were 93 households out of which 24.7% had children under the age of 18 living with them, 47.3% were married couples living together, 2.2% had a female householder with no husband present, and 48.4% were non-families. 39.8% of all households were made up of individuals and 4.3% had someone living alone who was 65 years of age or older. The average household size was 2.18 and the average family size was 3.02.

All content from Kiddle encyclopedia articles (including the article images and facts) can be freely used under Attribution-ShareAlike license, unless stated otherwise. Cite this article:
Silver Plume, Colorado Facts for Kids. Kiddle Encyclopedia.