The historic Town of Empire is a Statutory Town located in Clear Creek County, Colorado, United States. The population was 282 at the 2010 census. The town is a former mining settlement that flourished during the Colorado Silver Boom in the late 19th century.

It is located in the valley of Clear Creek west of Denver, on the north side of the valley. The town consists of several commercial establishments and residents. U.S. Highway 40 passes through the town as its ascends towards Berthoud Pass, putting the town on the direct route between Denver and Middle Park.

A post office called Empire City was established in 1861, and the name was changed to Empire in 1886. The town was named after New York, the "Empire State". Empire was incorporated in 1882.

West of the town of Empire is a group of summits, which includes Mount Flora, Mount Eva, Parry Peak, James Peak, Colorado Mines Peak, and Mount Bancroft, named for Frederick J. Bancroft who was noted for his public health and historical work for the state.

There were 163 households out of which 30.7% had children under the age of 18 living with them, 39.3% were married couples living together, 11.7% had a female householder with no husband present, and 46.0% were non-families. 39.3% of all households were made up of individuals and 6.7% had someone living alone who was 65 years of age or older. The average household size was 2.18 and the average family size was 2.99.

The poet Vachel Lindsay visited his family often at their vacation spot in Empire. He would sometimes walk there on foot, doing a tramp from Illinois to Colorado, chanting poems and doing farm work along the way.

This climate type is dominated by the winter season, a long, bitterly cold period with short, clear days, relatively little precipitation mostly in the form of snow, and low humidity. 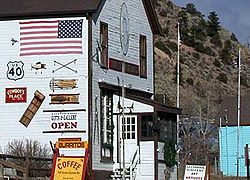 Empire is the setting of Bonnie Nadzam's short story, titled "Empire" after the town.

All content from Kiddle encyclopedia articles (including the article images and facts) can be freely used under Attribution-ShareAlike license, unless stated otherwise. Cite this article:
Empire, Colorado Facts for Kids. Kiddle Encyclopedia.