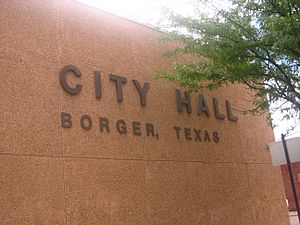 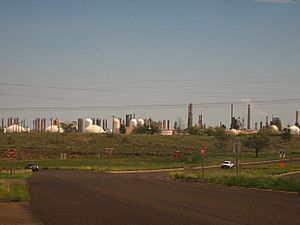 An oil refinery in Borger

Borger ( BOAR-jər) is the largest city in Hutchinson County, Texas, United States. The population was 13,251 at the 2010 census. Borger is named for businessman Asa Philip "Ace" Borger, who also established the Hutchinson County seat of Stinnett and several other small towns in Texas and Oklahoma.

The first Panhandle oil well was drilled in the Borger area on May 2, 1921, on the 6666 (the "Four Sixes") Ranch of S.B. Burnett. The strike was of a poor quality, and later wells in Borger and Pampa spurred the petroleum boom. The first rotary drilling rig, built at the then staggering price of $25,000, was placed into use near Borger by W.T. Willis, J.E. Trigg, and H.D. Lewis. The 6-inch-diameter (150 mm) drill could pierce through rock.

Ace Borger and his business partner John R. Miller purchased a 240-acre (0.97 km2) townsite near the Canadian River in March 1926 after the discovery of oil in the vicinity. Within a few months time, the boomtown had swelled to a population of 45,000, most lured by sensational advertising and "black gold". In October 1926, the city charter was adopted, and Miller was elected mayor. By this time the Panhandle & Santa Fe Railway had completed the spur line to Borger, a post office had opened, and a school district was established. The boomtown of Borger soon had steam-generated electricity, telephone service, a hotel, and a jail. Regionalist artist Thomas Hart Benton depicted this period of Borger in his large painting "Boomtown".

In the months that followed, oilmen, roughnecks, prospectors, panhandlers and fortune seekers were joined by cardsharks, bootleggers and drug dealers. The city became known as "Booger Town" as it attracted criminals and fugitives from the law. The town government soon fell under control of an organized crime syndicate led by Mayor Miller's shady associate, "Two-Gun Dick" Herwig. Murder and robbery became an everyday occurrence, and illegal moonshining and home brewing flourished under the fatherly watch of Herwig and his henchmen, including W. J. (Shine) Popejoy, the king of the Texas bootleggers. Borger became so notorious that in the spring of 1927 Texas Governor Dan Moody sent a force of Texas Rangers to rein in the town. The Texas Rangers were led by Captains Frank Hamer and Thomas R. Hickman. (Hamer would go on to later fame and even infamy as the man who killed Bonnie and Clyde.)

The Texas Rangers did have a stabilizing effect, but Borger still struggled with lawlessness and violence into the 1930s, climaxing with the murder of District Attorney John A. Holmes by an assassin on September 18, 1929. This event caused Governor Moody to impose martial law for a month and send in state troops to help rid the town of its criminal element. Eventually Borger settled down.

By the late 1930s Borger was pushed from one era to another by the Great Depression. Phillips Petroleum and others profited from the oil fields in the area, but during this time the price of oil and gas dropped, ending the "boom" and the former rapid growth of Borger. Carbon black plants added black soot to the Dust Bowl storms, covering the town in layers of dark grime. "Okie" migrants forced off their foreclosed farms back in Oklahoma, found work in Borger plants and refineries. The Works Project Administration provided the town with new red brick streets as the ramshackle shacks throughout town were replaced by more permanent buildings. During World War II, synthetic rubber and other petroleum products became important in the Borger area. By the 1960s the Borger area was one of the largest producers of oil, carbon black, and petrochemicals and supplies in the state. The creation of nearby Lake Meredith also added to the town's economy as an important recreational area.

Today, Borger remains an important shipping point for agricultural produce as well as for the petroleum products produced there. Borger is the home of the world's largest inland petrochemical complexes, Chevron-Phillips Chemical Company which produces specialty chemicals and is the sole manufacturer of RYTON PPS plastics in the world. Phillips 66 Petroleum Company processes crude oil and natural gas liquids. Agrium manufactures nitrogen fertilizer in its Borger plant. Borger also has Sid Richardson Carbon Company, which produces rubber grade carbon black and is used to strengthen rubber tires, and Orion Engineered Carbons, Inc., which produces a variety of carbon blacks at its Borger facility.

The original townsite is said to have been founded around 1898 by John F. Weatherly, a rancher who built a dugout and gave the future town the grandiose name of Granada. Weatherly's wife wanted it named after her former home – a town in West Virginia called Isom. 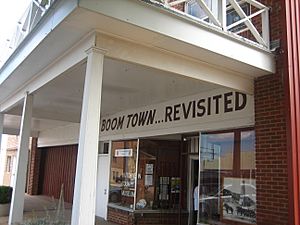 The Weatherlys lost interest in the town they founded and moved to the nearby town of Panhandle in 1922. But they wisely retained ownership of all that was Isom. When oil was discovered in early 1926, Weatherly returned and moved the town to the oilfield spur of the railroad near Borger.

Isom was platted with all lots south of First Street being Isom, Texas, and all streets north in Borger. From June to December 1926, the towns were rivals.

Although the town had a railroad depot, several oil-well supply warehouses and no shortage of would-be citizens, a petition signed by 1,200 residents in early December declared Borger the winner. Isom's school merged with Borger's schools, driving the last stake into Isom.

The town has the dubious distinction of being the oldest of the townsites annexed by Borger.

During the winter of 1982–1983, Borger received a total of 58.7 inches of snow. This is the most snow that any Texas town has ever received during the same winter season.

According to the United States Census Bureau, Borger has a total land area of 8.77 square miles (22.7 km2). 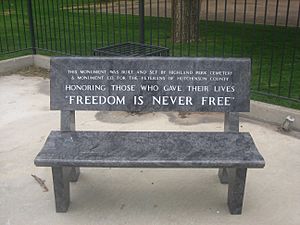 "Freedom Is Never Free" says the bench at the Borger Veterans Monument. 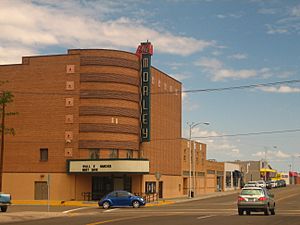 The Morley Theater in downtown Borger

All content from Kiddle encyclopedia articles (including the article images and facts) can be freely used under Attribution-ShareAlike license, unless stated otherwise. Cite this article:
Borger, Texas Facts for Kids. Kiddle Encyclopedia.