Hancock is a city in Houghton County in the U.S. state of Michigan. It is located across the Keweenaw Waterway from the city of Houghton on the Keweenaw Peninsula. The population was 4,634 at the 2010 census. The city has been consistently ranked as the third-snowiest city in the United States by The Weather Channel. 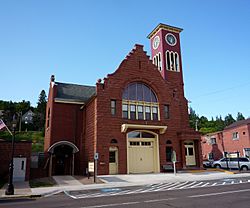 The Hancock Town Hall and Fire Hall is listed on the National Register of Historic Places.

The land on which Hancock was built was originally owned by James Hicks.

The earliest building in what is now the City of Hancock was a log cabin erected in 1846 on the site of the Ruggles Mining Claim; it is no longer standing, the site taken up by the Houghton County Garage buildings. It was owned by Christopher Columbus (C.C.) Douglass, who came to live there in 1852. The Quincy Mining Company founded Hancock in 1859 after purchasing land from Douglass and building an office and mine on the site. The city was named after John Hancock, signer of the Declaration of Independence.

Hancock's first store was built by the Leopold brothers in 1858; the store also housed the first post office. Samuel W. Hill, an agent for the Quincy Mining Company, platted Hancock Village in 1859. Although it was organized and officers elected in 1863, the village was not incorporated until 1875 under a charter amended in 1877.

In 1860, the Portage Lake smelter opened in Hancock.

In 1869 a fire burnt down about 75% of the village. There was also a significant fire in the 1940s that destroyed much of the downtown.

The Mineral Range Railroad began providing passenger and freight service between Hancock and Calumet in 1873.

Hancock was incorporated as a city in 1903.

Looking East down Water St. around 1906 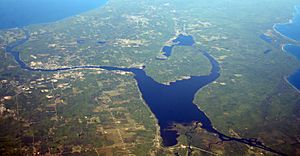 Hancock is on the north bank of the Keweenaw Waterway, opposite Houghton, Michigan. Portage Lake is at right center of this 2010 Doc Searles photo.

According to the United States Census Bureau, the city has a total area of 2.97 square miles (7.69 km2), of which 2.60 square miles (6.73 km2) is land and 0.37 square miles (0.96 km2) is water. Hancock is connected to Houghton, Michigan by the Portage Lake Lift Bridge, which crosses the dredged Keweenaw Waterway.

The city is bounded on the south by the Portage Canal, parts of Quincy, Hancock and Franklin Townships; on the east by West Ripley; and on the north by Quincy and Hancock Townships.

Hancock has a humid continental climate, with typically long and snowy winters and much lake effect snow. Hancock has the distinction of being the second snowiest city in the United States (and the snowiest city in the East) with snowfall averaging 211.7 inches per year. The city is located along the lake effect snow-prone Keweenaw Peninsula. In the 1978–79 snow season, a whopping 390 inches of snow fell in Hancock. Accumulating snow has been known to fall as late as early June here.

Hancock has been called "the focal point of Finns in the United States". Hancock hosts an annual midwinter festival called Heikinpäivä, celebrating the feast day of Saint Henrik, patron saint of Finland and Heikki Lunta.

Every summer, the cities of Hancock and neighboring Houghton host a festival known as "Bridgefest," to commemorate the building of the Portage Lake Lift Bridge. 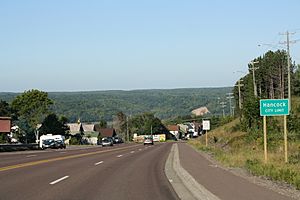 There were 1,882 households, of which 21.4% had children under the age of 18 living with them, 36.4% were married couples living together, 9.7% had a female householder with no husband present, 3.6% had a male householder with no wife present, and 50.4% were non-families. 37.7% of all households were made up of individuals, and 13% had someone living alone who was 65 years of age or older. The average household size was 2.20 and the average family size was 2.90. 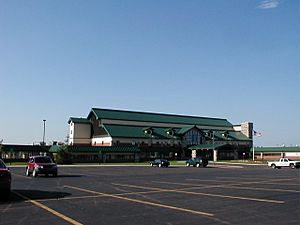 The East Hancock neighborhood is part of the city and consists of many old Victorian-style houses which were once owned by mining company officials.

Doctors' Park is a neighbourhood located in West Hancock near the former Portage View Hospital Building (now the Jutila Centre of Finlandia University). It lies north of West Quincy Street.

The Quincy Street Historic District encompasses the center of Hancock's downtown, covering the 100, 200, and 300 blocks of Quincy Street.

UP Health system operates a Hospital with a Level 3 Trauma Center at 500 Campus Drive Hancock, MI 49930 called the UP Health System - Portage.

The birthplace of Mary Chase Perry Stratton, founder of Pewabic Pottery, "escaped the 1869 fire"; it is now called Pewabic House and run as a museum.

The Kerredge Gallery and the Republic Bank Gallery are both located inside the Copper Country Community Arts Center.

The Jack Stevens Trail runs through the city.

Indian Trails bus lines operates a terminal at the Shottle Bop Party Store, 125 Quincy Street. The services runs between Hancock and Milwaukee, WI. Until January 31, 2007 this was operated by Greyhound Bus Lines.

In the early 20th century, the Houghton County Traction Company ran a trolley system with service to many nearby towns.

Hancock Public Transit operates a demand bus which will take riders to anywhere in Hancock, Houghton, or Ripley.

Hancock is the sister city of Porvoo, Finland. 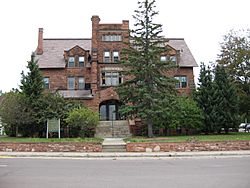 Hancock is the home of Finlandia University (formerly Suomi College). Suomi College was founded in 1896 by the Finnish Evangelical Lutheran Church of America. In the 1880s large numbers of Finns immigrated to Hancock to labor in the copper and lumber industries. One immigrant, mission pastor J. K. Nikander of the Finnish Evangelical Lutheran Church of America, headquartered in Hancock, wanted to ensure seminary training in America. He had observed that Swedish and Finnish immigrants along the Delaware River did not train new ministers, and he feared a loss of Finnish identity. In 1896 Nikander founded Suomi College. The college's role was to preserve Finnish culture, train Lutheran ministers and teach English. During the 1920s Suomi became a liberal arts college. In 1958 the seminary separated from the college. Four years later the Finnish Evangelical Lutheran Church of America merged with other mainstream Lutheran churches. The cornerstone of Old Main, the first building erected at Suomi College, was laid on May 30, 1898. Jacobsville sandstone, quarried at the Portage Entry of the Keweenaw waterway, was brought here by barge, cut, and used to construct Old Main. Dedicated on January 21, 1900, it contained a dormitory, kitchen, laundry, classrooms, offices, library, chapel, and lounge. The burgeoning college quickly outgrew this building, and in 1901 a frame structure, housing a gym, meeting hall, and music center was erected on an adjacent lot. The frame building was demolished when Nikander Hall, named for Suomi's founder, J. K. Nikander, was constructed in 1939. The hall was designed by the architectural firm of Saarinen and Swanson, the former of which being the world-renowned Finnish-American architect Eero Saarinen.

Several parts of the campus of Michigan Technological University are also located in Hancock, including a former MTU "underground classroom" in the Quincy Mine.

The 2004 Professional Walleye Trail Championship Tournament was held partly in the city.

All content from Kiddle encyclopedia articles (including the article images and facts) can be freely used under Attribution-ShareAlike license, unless stated otherwise. Cite this article:
Hancock, Michigan Facts for Kids. Kiddle Encyclopedia.