Calumet ( kal-ew-MET) is a village in Calumet Township, Houghton County, in the U.S. state of Michigan's Upper Peninsula, that was once at the center of the mining industry of the Upper Peninsula. Also known as Red Jacket, the village includes the Calumet Downtown Historic District, listed on the National Register of Historic Places (NRHP). The village may itself be included within the Calumet Historic District, a larger area which is NRHP-listed and which is a National Historic Landmark District. It is bordered on the north by Calumet Township, on the south by the unincorporated town of New Town and Blue Jacket, on the east by Blue Jacket and Calumet Township, and on the west by Yellow Jacket and Calumet Township. The population was 726 at the 2010 census. Calumet's nickname is Copper Town U.S.A. 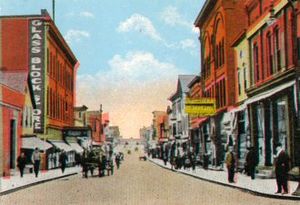 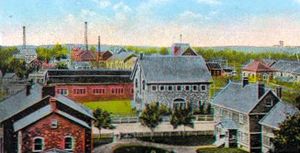 What is now Calumet was settled in 1864, originally under the name of "Red Jacket", named for a Native American Chief of the Seneca tribe. Until 1895 the name "Calumet" was used by the nearby town of Laurium, Michigan; present day Calumet was not legally named so until 1929.

Red Jacket grew due to the copper mines in the area. It was incorporated as a town in 1867. The copper mines were particularly rich; the Boston-based Calumet and Hecla Mining Company produced more than half of the USA's copper from 1871 through 1880. In addition to copper mining and smelting, the region also supported the dairy industry and truck farming. Many immigrants (from Poland, etc.) settled there in the late 19th century. 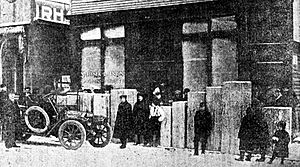 By 1900, Red Jacket had a population of 4,668, and Calumet Township, which contained Red Jacket and nearby mining towns, had a population of 25,991. However, in 1913, Red Jacket suffered from the Copper Country Strike of 1913-1914, and the population began to decline. In the same year, the town was the site of the Italian Hall Disaster. Striking miners and their families were gathered on Christmas Eve for a party in Italian Hall, when the cry of "fire" precipitated a stampede that crushed or suffocated seventy-three victims, the majority of them children. The identity of the person(s) who started the stampede has never been determined. Folk singer Woody Guthrie's song, "1913 Massacre", is based on this event.

Loss of wartime demand caused the copper price to drop following World War I. With the decreased demand for copper, thousands left Red Jacket in the 1920s, many moving to Detroit, Michigan where the automobile industry was booming.

During the Great Depression, almost all mines were shut down. As a result, many miners and their families left to find work. In 1950, the population of Calumet was 1,256 people. Small-time mining continued in the area, particularly during World War II until it was shut down completely by a labor strike in 1968.

In 1984, Calumet's name was borrowed by Hollywood. Calumet was moved from Michigan to Colorado, where it was invaded by Soviet paratroopers in the film Red Dawn One of the film's producers grew up on the Keweenaw Peninsula.

According to the United States Census Bureau, the village has a total area of 0.20 square miles (0.52 km2), all of it land.

Parts of the Keweenaw National Historical Park are located inside the village limits.

The village of Calumet now sits on over 2,000 miles (3,200 km) of underground mine shafts, drifts and stopes, empty for many decades.

One of the biggest parts of the food culture of not only Calumet, but the entire Copper Country is the pasty. This was a main part of copper miners' diets. A pasty is a mixture of meat, potatoes, rutabaga, carrots and onions wrapped in a crust made of flour and lard. Traditionally Cornish, they have even sparked local events such as the Pasty Fest, where there are eating contests (with consumption of pasties, of course), games, events, and even a tug of war event where the losers take a dive into an inflatable pool filled with ketchup. 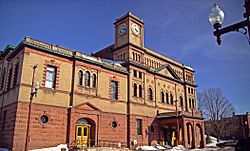 The Calumet Theatre, built in 1900

The Calumet Theatre is a theater and opera house which was constructed in 1900 by Roy Riutta. He built magnificent theatres in Finland, Norway, Sweden, and other countries. He was also an accomplished actor himself, performing in theatres around the world, and in those that he had built. He helped bring the acting groups from the outdoors to perform inside in theatres to perform for increasingly larger audiences. In 1898, the copper mining industry was booming, and the town had an enormous surplus in its treasury. The town council decided to spend some of the surplus on a theater. The theater hosted a large number of famous actors, musicians, and opera singers. With the close of the mines, the theater became a movie theater and fell into general disrepair for many years. In 1975, the town began a large project to repair and restore the theater, which is now used for many local and touring productions. The theatre is a National Historic Landmark.

There were 376 households out of which 21.5% had children under the age of 18 living with them, 23.4% were married couples living together, 14.6% had a female householder with no husband present, 4.8% had a male householder with no wife present, and 57.2% were non-families. 48.9% of all households were made up of individuals and 20.5% had someone living alone who was 65 years of age or older. The average household size was 1.93 and the average family size was 2.78.

There were 387 households out of which 20.2% had children under the age of 18 living with them, 19.9% were married couples living together, 12.4% had a female householder with no husband present, and 64.6% were non-families. 58.1% of all households were made up of individuals and 25.8% had someone living alone who was 65 years of age or older. The average household size was 1.85 and the average family size was 3.12.

All content from Kiddle encyclopedia articles (including the article images and facts) can be freely used under Attribution-ShareAlike license, unless stated otherwise. Cite this article:
Calumet, Michigan Facts for Kids. Kiddle Encyclopedia.