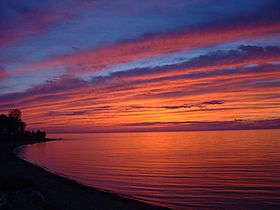 F.J. McLain State Park is a 443-acre (179 ha) public recreation area on the Keweenaw Peninsula in Houghton County, Michigan. The state park is located on M-203 halfway between Hancock and Calumet. It is about 10 miles (16 km) from each city. The park's offshore sights include sunsets over Lake Superior and the art deco–style Keweenaw Waterway Upper Entrance Light.

The park is named after Houghton County Commissioner Frederick J. McLain, an instrumental figure in securing land for the site in the 1930s. Laborers working through the Work Projects Administration (WPA) performed most of the park's construction. A new entrance and contact station were built in 1965, following the relocation of M-203.

While the majority of the shoreline is rocky, a stretch known as "the Breakwaters" near the Keweenaw Waterway at the park's southern end provides a sandy beach for swimming. The park also offers fishing, picnicking, hiking and cross-country skiing trails, camping, and cabins.

During the first week of the fall semester, Michigan Technological University cancels afternoon classes to allow students and faculty to hold "K-Day" (or "Keweenaw Day") at the park.

The spelling of the park's name is inconsistent on roadsigns and in local publications, varying between "McLain", "MacLain", and "McClain", and is often referred to by locals as "McLain's."

All content from Kiddle encyclopedia articles (including the article images and facts) can be freely used under Attribution-ShareAlike license, unless stated otherwise. Cite this article:
McLain State Park Facts for Kids. Kiddle Encyclopedia.