The Calumet and Hecla Industrial District is a historic district located in Calumet, Michigan and roughly bounded by Hecla and Torch Lake railroad tracks, Calumet Avenue, Mine and Depot Streets. The district contains structures associated with the copper mines worked by the Calumet and Hecla Mining Company, located along a line above the copper lode, where railroad tracks connected separate mine heads. The Historic District is completely contained in the Calumet Historic District (a National Historic Landmark District) and the Keweenaw National Historical Park. It was designated a Michigan State Historic Site in 1973 and was listed on the National Register of Historic Places in 1974.

Agassiz was the president of the newly incorporated company, a position he held until his death in 1910. The company prospered under his leadership; in particular it underwent substantial growth between 1880 and 1910, when most of these buildings currently standing in the district were built. However, after a 1913 mining strike, the company gradually declined, and was weakened further by the onset of the Great Depression. Finally, in 1968, the company was purchased by Universal Oil Products, who closed the Keweenaw mines for good. 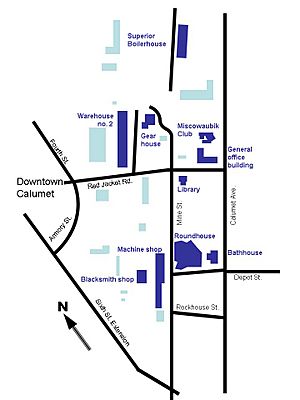 Locations of structures in this historic district. Structures included are in dark blue; other Calumet and Hecla Industrial structures are in light blue.

There are ten buildings in the district: the Machine Shop, the "Blacksmith Shop," (misidentified as such; actually the Pipe Shop), the Roundhouse, Warehouse #2, the Superior Boilerhouse, the Gearhouse, the General Office Building, the Library, the Bathhouse, and the Miscowaubik Club. These structures, constructed primarily during the 1880s, represent the second generation of mine buildings constructed at the site; the earliest structures were destroyed by fire or razed. These buildings are part of a larger industrial complex of mine-related buildings, originally built by the Calumet and Hecla Mining Company, that still stand in the area along Calumet Avenue and Mine Street. 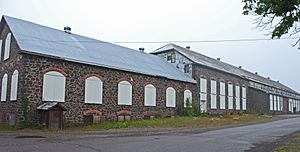 The machine shop is a two-story structure, 416 feet (127 m) long and 54 feet (16 m) wide, made of coursed mine rock with a hipped gable roof covered in corrugated sheet metal. A clerestory window admits light to the interior, which is floored in concrete. The original machine shop was designed around 1882 by Erasmus D. Leavitt Jr., a consulting engineer with Calumet & Hecla; it was used to repair large equipment, including mining skips and trams. A major reconstruction was performed in 1907, and additions were made in 1911; it is likely that the building in its current form dates entirely from these two years.

The blacksmith shop, built in 1883, is a hipped-roof structure built of rock, measuring 96 feet (29 m) by 54 feet and roofed with corrugated metal. It was originally used as a locomotive house for the narrow gauge Calumet & Hecla railroad. It was later used as a smith shop; an addition was constructed in 1904.

The roundhouse is built of coursed mine rock masonry in the shape of a semicircle with a turntable in the center. The original structure, built in 1888 to service locomotives for the Hecla and Torch Lake Railroad, ran approximately 170 degrees around the turntable, and had twelve train stalls ranging from 75 feet (23 m) deep on the south end and 90 feet (27 m) deep on the north. The structure is built of random mine rock with brick arches over the windows with a shed roof. Train bay doors are spanned with cast iron lintels.

Warehouse number 2 was constructed with rail tracks running through it so that large items could be loaded inside.

The original Superior Boilerhouse, built in 1880, is a 60 feet (18 m) by 77 feet (23 m) structure, constructed of coursed rubble, with a steeply hipped roof and an attached brick smokestack measuring 150 feet (46 m) tall. An addition built in 1895, known as the "New Boilerhouse," measures 154 feet (47 m) by 69 feet. Both the original boilerhouse and the addition were designed by Erasmus D. Leavit, Jr., and were intended to supply steam to the nearby enginehouse.

The gearhouse is constructed from rough sandstone and mine rock with a steeply pitched roof. It measures 78 feet (24 m) by 71 feet (22 m). The structure was first built sometime in the 1880s, but was rebuilt in the 1890s after a disastrous fire. The original use of this building was housing the main pumping engine equipment; however, in 1892 it was converted to use as an electrical power house, and used as such until a new power plant was built in Lake Linden in 1906. 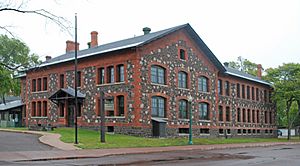 The General Office Building is a 3+1⁄2-story office building built of reddish-brown stone trimmed with brick. It was used as a general mine operation center, and also housed engineering and accounting departments. The original building was designed in the early 1890s by the Boston firm of Shaw and Hunnewell; two later additions, architecturally faithful to the original, were designed by the Marquette firm of Charlton and Kuenzli. Of these three sections, the eastern section measures 69 feet (21 m) by 46 feet (14 m), the western section 22 feet (6.7 m) by 30 feet (9.1 m), and the northern section 46 feet (14 m) by 35 feet.

The building currently serves as the headquarters for the Keweenaw National Historical Park. 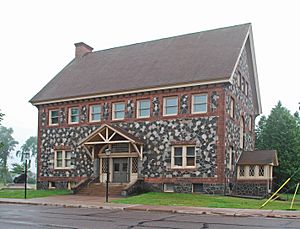 Like the office building, the library was designed by Shaw and Hunnewell. The building is two-and-a-half stories high, built of rough masonry trimmed with brick around the windows, and with brick quoins. It is built in a "T" shape, with the main wing measuring 62 feet (19 m) by 42 feet (13 m) and the south wing 38 feet (12 m) by 32 feet. The roof is formed from two intersecting gables covered with dark grey slate.

The building was originally designed to house adult and children's reading rooms on the second floor, library stacks, office space, and cloakrooms on the first floor, and baths for men, women, and children in the basement. Small alterations were made over the next few years, including adding a west entrance porch, reconfiguring the baths, and adding more shelves.

In 1911, a new bathhouse was constructed, and the bath section of the library was remodeled to provide additional stack space. However, as the fortunes of the Calumet & Hecla Mining Company declined, support for the library became difficult. In 1944, the library collection was transferred to the Calumet High School, and the building was converted to office space. The library currently serves as the Keweenaw History Center, housing historical artifacts and archives.

The library is significant as a notable example of the paternalism of corporations at the time, as well as being a striking example of sophisticated design and stonework. 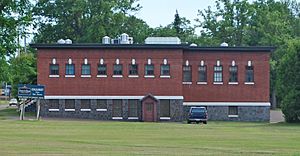 The bathhouse was constructed in 1910. The building also served as the home of Calumet-based television station WBKP from its sign-on in 1996 until it moved from the area in 2001. The building was purchased in November 2020 by Calumet Electronics and will be renovated to serve as its headquarters.

The Miscowaubik Club was originally built as a private home, reportedly in about 1875 for chief mining engineer Thomas Hoatson.

All content from Kiddle encyclopedia articles (including the article images and facts) can be freely used under Attribution-ShareAlike license, unless stated otherwise. Cite this article:
Calumet and Hecla Industrial District Facts for Kids. Kiddle Encyclopedia.