Whole of Mont Ripley in January 2012, with the Quincy Smelter in the foreground

Mont Ripley is a ski hill located in Franklin Township, Houghton County, in Michigan's Upper Peninsula. The site is just outside the cities of Hancock and Houghton. It is owned by Michigan Technological University. It was founded in the early 1900s by Fred Pabst Jr. (and managed by Fred Lonsdorf). With the addition of snow making in 2000, the season has been extended from late November to late March or early April.

Mont Ripley is known for its challenging terrain and views of Houghton, Portage Lake and the Huron Mountains. It is also commonly used by racers.

Mont Ripley opened in 1934. In 1944 it was taken over by Michigan Technological University.

In 2006, a new building was built to ease congestion in the main chalet. The new chalet has a gas fireplace and added seating, as well as more lockers. It is mainly used for special events such as races and parties. Mont Ripley also purchased eight more snow making guns to add to their capability to get all the runs open earlier in the season.

Also in 2006, a second chair lift, dubbed the "Copper Hoist", was purchased and was built on the east side of the hill in 2007, making it easier for skiers and snowboarders to use those runs, raising the lift count to three (2 chair lifts and one t-bar).

A flood on June 17, 2018, significantly damaged the two easternmost ski runs on the hill (Powderstash and Deer Track Trail).

Hill modifications through the years

View of the Portage Canal from Mont Ripley during Autumn. 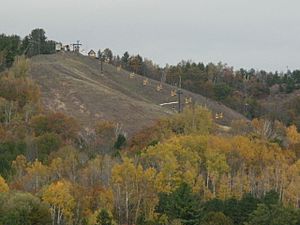 Mont Ripley has been a part of Michigan Tech since the early 1940s giving it the distinction as the oldest ski area in Michigan and becoming an important recreational feature of the Houghton-Hancock area. The hill has experienced a series of evolutionary modifications since its creation, and continues to operate as a modern ski facility.

All content from Kiddle encyclopedia articles (including the article images and facts) can be freely used under Attribution-ShareAlike license, unless stated otherwise. Cite this article:
Mont Ripley Facts for Kids. Kiddle Encyclopedia.