The Huron Mountains are located in the Upper Peninsula of the U.S. state of Michigan, mostly in Marquette and Baraga counties, overlooking Lake Superior. Their highest peak is Mount Arvon which, at 1,979 feet (603 m) above sea level, is the highest point in the state of Michigan. Nearby Mt. Curwood, Michigan's second highest mountain at 1,978 feet (603 m), is also a part of the Huron Mountains. 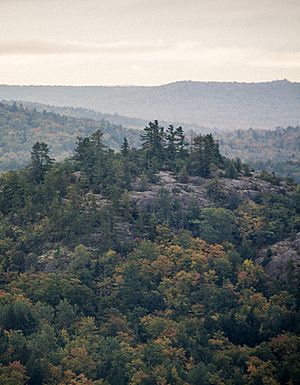 A rocky summit in the Huron Mountains

The mountains are the remnants of much higher peaks, composed of rocks dating back to the Precambrian period, which have gone through successive periods of uplift and erosion. The outcroppings of granite and metamorphic rocks bear the evidence of more recent glacial action. Geologically, the area is part of the Canadian shield.

The region is subject to heavy lake-effect snow from Lake Superior. No official weather records are maintained in the mountains, but annual snowfall averages easily exceed 200 inches (510 cm) across the entire range. Some higher elevations probably average over 250 inches (640 cm). A community called Herman receives an unofficial average of 236 inches (600 cm) per season.

The region is characterized by its boreal vegetation and unusually diverse and pristine habitats. It includes one of the largest remnants of substantially undisturbed old-growth forest in the upper Great Lakes region (including the Porcupine Mountains, the Sylvania Tract, and the Boundary Waters Canoe Area). Forests on the uplands are dominated by hemlock and northern hardwoods. Forests on the steep slopes and mountain ridges are dominated by pine-oak stands.

Looking east over the Huron Mountains from Skanee.

The area has been preserved largely due to the influence of the highly exclusive Huron Mountain Club (HMC), which owns a large tract of land in the mountains, including a portion of the Salmon Trout River. The club commissioned noted naturalist Aldo Leopold to create a preservation plan for the area. However, the private club also restricts access to its property, which is unfortunate for white water rafting enthusiasts since the Salmon Trout is rumored to be one of the best rafting rivers in Michigan. The exclusive club even put Henry Ford on a waiting list. In order to gain favor with the club, Ford blocked the construction of a planned extension of highway M-35 through the mountains. After gaining membership, Ford commissioned noted architect Albert Kahn in 1929 to build a $100,000 cabin for his use.

The Huron Mountain Wildlife Foundation sponsors natural science research in the region, including the HMC lands.

In the late 1950s, the Huron Mountains were a candidate for becoming a national park. However, the HMC was influential in undermining the proposal.

Facing west from CR 510, with the recently paved AAA road in the foreground

All content from Kiddle encyclopedia articles (including the article images and facts) can be freely used under Attribution-ShareAlike license, unless stated otherwise. Cite this article:
Huron Mountains Facts for Kids. Kiddle Encyclopedia.