Pewabic Pottery is a ceramic studio and school at 10125 East Jefferson Avenue, Detroit, Michigan. Founded in 1903, the studio is known for its iridescent glazes, some of which grace notable buildings such as the Shedd Aquarium and Basilica of the National Shrine of the Immaculate Conception. The pottery continues in operation today, and was designated a National Historic Landmark in 1991.

The pottery was founded in 1903 by the artist and teacher Mary Chase Perry Stratton and Horace James Caulkins, her business partner. Caulkins was considered a high-heat and kiln specialist, and developed the "Revelation kiln". Mary Perry Stratton was "the artistic and marketing force." The collaboration of two and their blend of art and technology gave the pottery its distinctive qualities as Detroit's contribution to the International Arts and Crafts movement and exemplified the American Craftsman Style.

The word Pewabic is derived from the Ojibwa (or Chippewa) word "wabic", which means metal, or "bewabic", which means iron or steel, and specifically referring to the "Pewabic" Upper Peninsula copper mine where Ms. Stratton walked with her father. The company is well known for the unusual iridescent glaze covering the pottery and tiles created in a manner outlined by the International Arts and Crafts movement.

In 1991, Pewabic Pottery was designated as a National Historic Landmark (see also List of National Historic Landmarks in Michigan). As Michigan's only historic pottery, the center continues to operate in a 1907 Tudor Revival building as a non-profit educational institution. They offer classes in ceramics, hold exhibitions, sell pottery made in house, showcase and sell artists from across the United States, and offer design and fabrication services for public and private buildings.

The museum's exhibits focus on the company's role in the history of Detroit, the Arts and Crafts movement in America and the development of ceramic art in the country. The galleries also showcase new works by modern ceramic artists.

Pewabic Pottery produces many kinds of hand made decorative objects. They are part of the collections of the Detroit Institute of Arts, the University of Michigan Museum of Art, and the Freer Gallery of Art.

Under Mary Stratton's artistic leadership, Pewabic Pottery employees created lamps, vessels, and architectural tiles. Architectural pieces have been a staple in Pewabic's history. They were known for their iridescent (like an oil slick with an incredible translucent quality and a phantasmagoric depth of color) glazes. Architectural tiles were used in churches, concert halls, fountains, libraries, museums, schools and public buildings. The studio's work graces numerous edifices throughout Michigan and the rest of the United States. Noteworthy examples include Herzstein Hall at Rice University in Houston, Texas, and the Shedd Aquarium in Chicago. Illinois. Detailed maps of public installations in the Detroit Metropolitan Area and the U.S.A. are available. See Architectural tile infra.

Particularly notable was the company's work at the Basilica of the National Shrine of the Immaculate Conception in Washington, D.C., consisting of arches outlined with iridescent Pewabic tile, huge ceramic medallions set in the ceiling, and fourteen Stations of the Cross for the crypt. 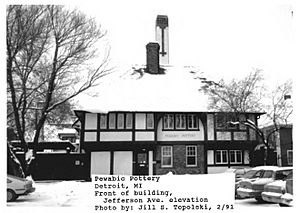 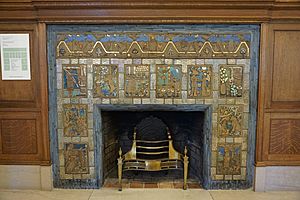 Pewabic tile was (and continues to be) in great demand in Detroit and the southeastern Michigan area for the use in buildings and it can be found in many of the area's finest structures. These include:

All content from Kiddle encyclopedia articles (including the article images and facts) can be freely used under Attribution-ShareAlike license, unless stated otherwise. Cite this article:
Pewabic Pottery Facts for Kids. Kiddle Encyclopedia.