Desdemona is a former oil boomtown and virtual ghost town located in Eastland County east of Abilene in West Texas. The community is located on Texas State Highway 16 at Farm-to-Market Roads 8 and 2214, approximately twenty miles southeast of the county seat of Eastland and twenty miles west of Stephenville, site of Tarleton State University.

Dating to 1857, Desdemona was one of the first Texas towns established west of the Brazos River. Settlers constructed a small fort on land owned by C.C. Blair for protection from Comanche Indian attacks. In 1873, Rockdale Baptist Church, the first organization of any kind in Eastland County, was constructed. Two years later, the brothers William and Ben Funderburg acquired the former Fort Blair land and proceeded to develop the community, then called Hogtown on Hog Creek. A post office was authorized in 1877 under the name "Desdemona", a reference not to the character from Shakespeare, but the daughter of an area justice of the peace. During the 1890s, agriculture was important in Desdemona, particularly peanuts. The population reached 340 in 1904.

In 1914, businessman J.W. "Shorty" Carruth drilled a shallow unproductive oil well and began selling stock in his Carruth Oil Company though he misrepresented the actual value of its worth. In 1923, a federal grand jury indicted Carruth for using the mail to defraud investors of some $7 million. He pleaded guilty and was sentenced to a year in the federal penitentiary in Leavenworth, Kansas. The presiding judge likened Carruth to a "highwayman".

In September 1918, Tom Dees, director of the Hog Creek Oil Company, struck oil on land owned by Joe Duke, and Desdemona quickly joined the list of western boomtowns. As many as sixteen thousand flocked to Desdemona between 1919 and 1922. At this time, the Desdemona field was perhaps the second largest in the oil belt, and stockholders of the Hog Creek Oil Company could sell their $100 shares for $10,250 each. Despite the newly acquired wealth, Desdemona was beset with sanitation problems when persistent rains flooded the streets and overflowed the petroleum pools. Influenza and typhoid fever reached epidemic proportions. 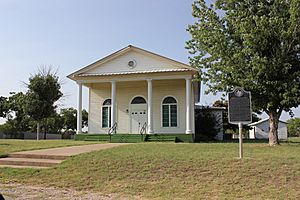 Oil production dropped from more than seven million barrels in 1919 to fewer than three million in 1921. The boom ended nearly as quickly as it began, and much of the newer population abandoned the community. Another fire in 1921 destroyed an entire block. The Lone Star Hotel was also burned. With few residents, Desdemona dissolved its municipal government in 1936, and the general area has since been governed by Eastland County. The Desdemona public school (grades 1-12) was built in 1922, expanded as a Works Progress Administration project in 1937, and closed because of lack of enrollment in 1969.

In 1976, ninety wells were still producing oil or natural gas in the Desdemona field, and a Mobil plant was producing butane. In 1980 and again in 2000, the Desdemona population was reported as 180. As of 2013 three businesses remain in the town.

All content from Kiddle encyclopedia articles (including the article images and facts) can be freely used under Attribution-ShareAlike license, unless stated otherwise. Cite this article:
Desdemona, Texas Facts for Kids. Kiddle Encyclopedia.