Holyoke is a city in Hampden County, Massachusetts, United States that lies between the western bank of the Connecticut River and the Mount Tom Range. As of 2012, the city had an estimated population of 40,135. Sitting eight miles north of Springfield, Holyoke is part of the Springfield Metropolitan Area, one of the two distinct metropolitan areas in Massachusetts. 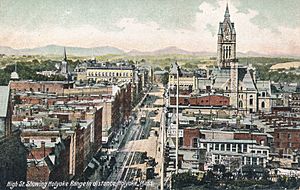 A part of Northampton known as Smith's Ferry was separated from the rest of the town by the creation of Easthampton in 1809. The shortest path to downtown Northampton was on a road near the Connecticut River oxbow, which was subject to frequent flooding. The neighborhood became the northern part of Holyoke in 1909.

Holyoke had few inhabitants until the construction of a dam and the Holyoke Canal System in 1849 and the subsequent construction of water-powered mills, particularly paper mills. At one point over 25 paper mills were in operation in the city. The Holyoke Machine Company, manufacturer of the Hercules water turbine, was among many industrial developments of the era.

Holyoke's population rose from just under 5,000 in 1860 to over 60,000 in 1920. In 1888, Holyoke's paper industry spurred the foundation of the American Pad & Paper Company, which as of 2007[update] is one of the largest suppliers of office products in the world. The availability of water power enabled Holyoke to support its own electric utility company and maintain it independently of America's major regional electric companies. The city was thus a rare unaffected area in the Northeast blackout of 1965, for example.

Holyoke was one of the first planned industrial communities in the United States. Holyoke features rectilinear street grids—a novelty in New England. This street hierarchy is seen as a potential economic development tool as it lends well to high-rise buildings, and the surrounding canals could be landscaped into a source of recreation and relaxation. Its grid pattern is notable in Western Massachusetts, where few roads are straight. The city's advantageous location on the Connecticut River—the largest river in New England—beside Hadley Falls, the river's steepest drop (60 feet), attracted the Boston Associates, who had successfully developed Lowell, Massachusetts' textile industry. From the late 19th century until the mid-20th century, Holyoke was the world's biggest paper manufacturer. The elaborate Holyoke Canal System, built to power paper and textile mills, distinguishes it from other Connecticut River cities. Holyoke is nicknamed "The Paper City" due to its fame as the world's greatest paper producer. 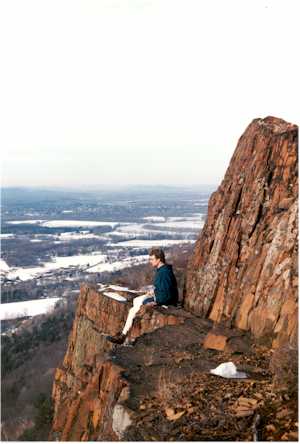 According to the United States Census Bureau, the city has a total area of 22.8 square miles (59 km2), of which 21.3 square miles (55 km2) is land and 1.5 square miles (3.9 km2) (6.70%) is water. The city is bordered by Southampton and Westfield to the west, Easthampton to the north, Hadley, South Hadley and Chicopee as river borders to the east, and West Springfield to the south.

Holyoke is the location of East Mountain, the Mount Tom Range, and Mount Tom, 1202 feet (363 m), the highest traprock peak on the Metacomet Ridge, a linear mountain range that extends from Long Island Sound to the Vermont border. Mount Tom is characterized by its high cliffs, sweeping vistas, and microclimate ecosystems. The 110-mile (180 km) Metacomet-Monadnock Trail traverses the Mount Tom Range and East Mountain.

The City of Holyoke is divided into 15 distinct neighborhoods; in alphabetical order, they are:

Politically, the city of Holyoke has recently supported candidates from the Democratic Party by a wide margin. In the 2012 elections, voters supported President Barack Obama over Mitt Romney by a margin of 76%-22%, and Elizabeth Warren over incumbent Senator Scott Brown 70%-30%. Holyoke elected an openly gay mayor, Alex Morse, in the 2011 municipal election.

According to the 2003 FBI Report of Offenses Known to Law Enforcement Holyoke's crime rate in most categories was above the national average, in some categories, significantly. Most of these crimes are placed in the category of property theft, with a property crime count of 2,822.

Historically, a city of working-class immigrants (and the business owners who employed them), the first wave of mill workers was predominantly Irish. Irish immigrants had begun to settle in the region before the construction of the dam and the industrialization that followed, which is why the area's early name was "Ireland's Parish." The Irish roots of Holyoke is still seen in its annual St. Patrick's Day Parade (see below).

In the 1850s, the mill owners began to recruit French-Canadians, who were viewed as more docile and less likely to create labor unions. Later waves of immigration led to significant growth and cultural influence of communities of Germans, Poles, and Jews over first half of the 20th century. Starting in the 1950s, a large influx of Puerto Ricans and people from other Latino groups began to immigrate and migrate to Holyoke. Today Latinos form the largest minority group in the city, with the largest percentage Puerto Rican population of any city in the US outside Puerto Rico proper, at 44.7%. The entire Latino population of Holyoke, as of the 2010 census, was 19,313, or 48.4% of the city's population of 39,880.

Holyoke is home to the second-largest St. Patrick's Day parade in the United States, surpassed only by the New York City parade. Held annually since 1952 on the Sunday following St. Patrick's Day, the parade draws hundreds of thousands of people from across New England and the Eastern seaboard of United States. The Holyoke Saint Patrick's Day Parade typically attracts 350,000 to 450,000 people each year, although in certain years in the 1960s and 1970s when the March weather was "perfect", that number blossomed to what the police department estimated were 1,000,000 celebrants.

The Puerto Rican community of Holyoke holds an annual Puerto Rican Day parade on the third weekend of July as part of an Annual Hispanic Family Festival held by La Familia Hispana, inc. Every year the parade grows in popularity, attracting Puerto Ricans from across the northeast.

Mayor Alex B. Morse, who first became an activist for LGBT rights as a high school student in Holyoke only six years earlier, presided at the city's first rainbow flag-raising ceremony in recognition of Gay Pride Month in June 2012. 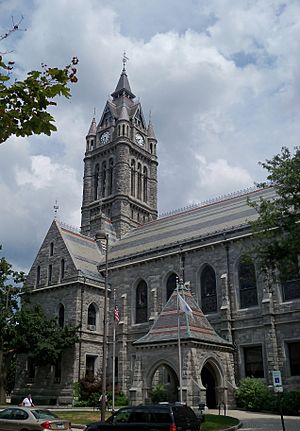 Passenger rail service returned to Holyoke in August 2015, after being absent since 1967. Amtrak's Vermonter stops at the Holyoke station once a day in each direction. Several buses from the Pioneer Valley Transit Authority also operate in the city.

All content from Kiddle encyclopedia articles (including the article images and facts) can be freely used under Attribution-ShareAlike license, unless stated otherwise. Cite this article:
Holyoke, Massachusetts Facts for Kids. Kiddle Encyclopedia.