According to legend, Saint Patrick used the three-leaved shamrock to explain the Holy Trinity to Irish pagans.

Patrick was a 5th-century Romano-British Christian missionary and bishop in Ireland. Much of what is known about Saint Patrick comes from his book Declaration, which is mostly biographical. It is believed that he was born in Roman Britain in the fourth century, into a wealthy Romano-British family. His father was a deacon and his grandfather was a priest in the Christian church. According to the Declaration, he was kidnapped at the age of sixteen by Irish raiders and taken as a slave to Gaelic Ireland. He spent six years there working as a shepherd and during this time he found God. The Declaration says that God told Patrick to flee to the coast, where a ship would be waiting to take him home. After making his way home, Patrick went on to become a priest.

According to tradition, Patrick returned to Ireland to convert the pagan Irish to Christianity. The Declaration says that he spent many years evangelizing in the northern half of Ireland and helped convert thousands to Christianity. Patrick's efforts against the druids were eventually turned into a legend in which he drove "snakes" out of Ireland. Since Ireland never had any snakes, one theory about this story is that God used Saint Patrick to drive the pagan religions out of Ireland.

Tradition holds that he died on March 17, 461, and was buried at Downpatrick. Over the following centuries, many legends grew about Patrick and he became Ireland's foremost saint. 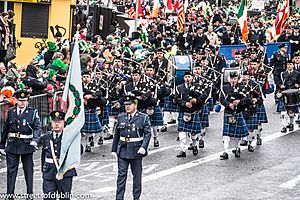 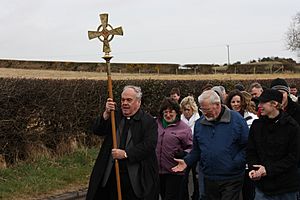 A St. Patrick's Day religious procession in Downpatrick, where Saint Patrick is said to be buried

St. Patrick's Day parades in Ireland date from the late 19th century, originating in the growing sense of nationalism of the period.

Because of the importance of the day, the celebrations in Dublin have, since 1996, been extended to a week-long event called St. Patrick's Festival, encompassing a spectacular fireworks display (Skyfest), open-air music, street theatre and the traditional parade. Many Irish people wear a bunch of shamrock on their lapels or hats on this day, while children wear tri-color (green, white, and orange) badges. Girls traditionally wore green ribbons in their hair and many still do.

The largest celebrations in Ireland outside Dublin are in Downpatrick, where Saint Patrick was buried following his death on March 17, 461. 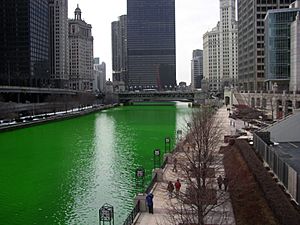 Saint Patrick's Day celebrations in the United States were brought by Irish-American immigrants. The first unofficial Saint Patrick's Day celebration took place in New York City on March 17, 1762, when Irish soldiers serving in the British military marched through the city. The smallest parade is said to take place in Hot Springs, Arkansas, in the United States; this parade is less than a single city block. Boulder, Colorado claims to have the shortest parade, which is also less than a single city block. 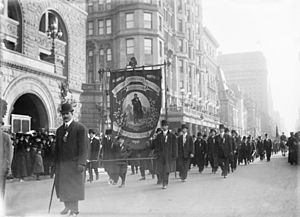 The first civic and public celebration of Saint Patrick's Day in the 13 colonies took place in Boston, Massachusetts, in 1737. The first Saint Patrick's Day celebrated in New York City was held at the Crown and Thistle Tavern in 1756. Since then, the New York celebration has become the largest Saint Patrick's Day parade in the world. Every year more than 150,000 marchers participate, including bands, firefighters, military and police groups, county associations, emigrant societies, and social and cultural clubs. The parade marches up 5th Avenue in Manhattan and it attracts roughly two million people.

The New York parade is moved to the previous Saturday (March 16) in years when March 17 is a Sunday.

The longest-running Saint Patrick's Day celebrations in the U.S. are: 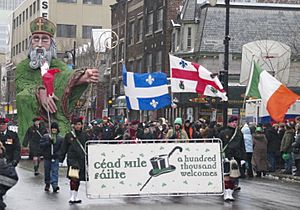 Montreal hosts one of the longest-running and largest St. Patrick's Day parades in North America.

The longest-running Saint Patrick's Day parade in Canada takes place each year in Montreal, where the parade began in 1824.

In Quebec City, there was an annual parade from 1837 to 1926. The Quebec City St. Patrick Parade returned in 2010 after more than 84 years. For the occasion, a portion of the New York Police Department Pipes and Drums were present as special guests.

There has been a parade held in Toronto since at least 1863. The Toronto Maple Leafs hockey team was known as the Toronto St. Patricks from 1919 to 1927 and wore green jerseys. In 1999, when the Maple Leafs played on St. Patrick's Day, they wore green St. Patrick's retro uniforms. There is a large parade in the city's downtown on the Sunday before March 17 which attracts over 100,000 spectators. 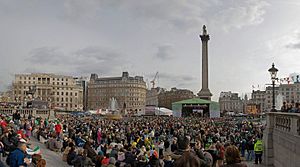 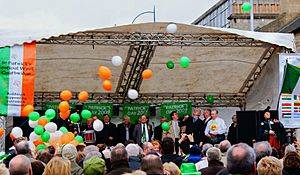 In Great Britain, Queen Elizabeth The Queen Mother used to present bowls of shamrock flown over from Ireland to members of the Irish Guards, a regiment in the British Army. The Irish Guards still wear a shamrock that has been flown in from Ireland on this day.

Birmingham holds the largest St. Patrick's Day parade in Britain with a city-center parade over a two-mile (3 km) route through the city center. The organizers describe it as the third-largest parade in the world after Dublin and New York.

London, since 2002, has had an annual St. Patrick's Day parade which takes place on weekends around the 17th, usually in Trafalgar Square. In 2008, the water in the Trafalgar Square fountains was dyed green.

Liverpool has the highest proportion of residents with Irish ancestry of any English city. This has led to a long-standing celebration on St. Patrick's Day in terms of music, cultural events, and the parade.

Manchester hosts a two-week Irish festival in the weeks prior to St. Patrick's Day. The festival includes an Irish Market that is based at the city's town hall and flies the Irish tricolor flag opposite the Union Flag. A large parade and many cultural and learning events take place throughout the two-week period. 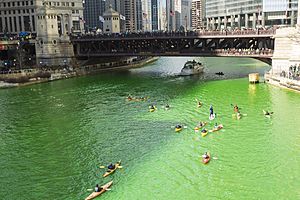 All content from Kiddle encyclopedia articles (including the article images and facts) can be freely used under Attribution-ShareAlike license, unless stated otherwise. Cite this article:
Saint Patrick's Day Facts for Kids. Kiddle Encyclopedia.