Chris Austin Hadfield (born 29 August 1959) is a retired Canadian astronaut who was the first Canadian to walk in space. An engineer and former Royal Canadian Air Force fighter pilot, Hadfield has flown two space shuttle missions and served as commander of the International Space Station.

Hadfield, who was raised on a farm in southern Ontario, was inspired as a child when he watched the Apollo 11 Moon landing on TV. He attended high school in Oakville and Milton and earned his glider pilot licence as a member of the Royal Canadian Air Cadets. He joined the Canadian Armed Forces and earned an engineering degree at Royal Military College. While in the military he learned to fly various types of aircraft and eventually became a test pilot and flew several experimental planes. As part of an exchange program with the United States Navy and United States Air Force, he obtained a master's degree in aviation systems at the University of Tennessee Space Institute.

In 1992, he was accepted into the Canadian astronaut program by the Canadian Space Agency. He first flew in space aboard STS-74 in November 1995 as a mission specialist. During the mission he visited the Russian space station Mir. In April 2001 he flew again on STS-100 and visited the International Space Station (ISS), where he walked in space and helped to install the Canadarm2. In December 2012 he flew for a third time aboard Soyuz TMA-07M and joined Expedition 34 on the ISS. He was a member of this expedition until March 2013 when he became the commander of the ISS as part of Expedition 35. He was responsible for a crew of five astronauts and helped to run dozens of scientific experiments dealing with the impact of low gravity on human biology.

During the mission he also gained popularity by chronicling life aboard the space station and taking pictures of the earth and posting them through Twitter, Facebook, Google+, and Tumblr to a large following of people around the world. He was a guest on television news and talk shows and gained popularity by playing the International Space Station's guitar in space. His mission ended in May 2013 when he returned to earth. Shortly after returning, he announced his retirement, capping a 35-year career as a military pilot and an astronaut.

Hadfield wrote a memoir title An Astronaut's Guide to Life on Earth and published it in 2013. The book became a New York Times bestseller and was the bestselling book in Canada on a Canadian subject.

Hadfield is enthusiastic about the prospects for a manned mission to Mars, and when asked in 2011 if he would consider a one-way journey to Mars to be the first to visit, he said "I would be honored to be given the opportunity."

Hadfield was born in Sarnia, Ontario. His parents are Roger and Eleanor Hadfield, who live in Milton, Ontario. Hadfield was raised on a corn farm in southern Ontario and became interested in flying at a young age and in being an astronaut at age nine when he saw the Apollo 11 Moon landing on television. He is married to his high-school girlfriend Helene, and they have three adult children: Kyle, Evan and Kristin Hadfield. Hadfield used to be a ski instructor at Glen Eden Ski Area before becoming a test pilot.

Hadfield served as Mission Specialist 1 on STS-74 in November 1995. It was NASA's second space shuttle mission to rendezvous and dock with the Russian Space Station Mir. During the flight, the crew of Space Shuttle Atlantis attached a five-tonne docking module to Mir and transferred over 1,000 kg of food, water, and scientific supplies to the cosmonauts. Hadfield flew as the first Canadian to operate the Canadarm in orbit, and the only Canadian ever to board Mir. 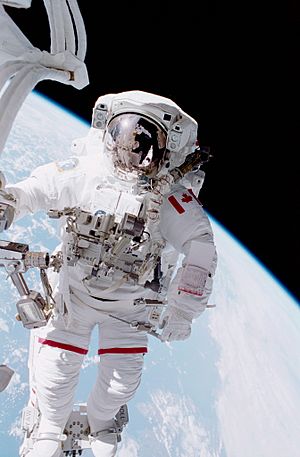 Hadfield spacewalking during the STS-100 mission

In April 2001, Hadfield served as Mission Specialist 1 on STS-100, International Space Station (ISS) assembly Flight 6A. The crew of Space Shuttle Endeavour delivered and installed Canadarm2, the new Canadian-built robotic arm, as well as the Italian-made resupply module Raffaello. During the 11-day flight, Hadfield performed two spacewalks, which made him the first Canadian to ever leave a spacecraft and float freely in space. During his first spacewalk Hadfield experienced severe eye irritation due to the anti-fog solution used to polish his spacesuit visor, temporarily blinding him and forcing him to vent oxygen into space. In total, Hadfield spent 14 hours, 50 minutes outside, travelling 10 times around the world during his spacewalk. 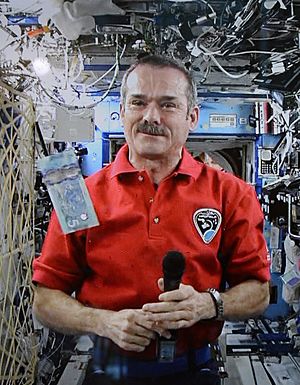 Hadfield answering media questions during unveiling of the Canadian $5 Frontier Series banknote during Expedition 35 on 30 April 2013. He unveiled the $10 banknote on the same day.
Main pages: Soyuz TMA-07M , Expedition 34 , and Expedition 35

On 19 December 2012, Hadfield launched in the Soyuz TMA-07M flight for a long duration stay on board the ISS as part of Expedition 35. He arrived at the station two days later, as scheduled, and became the first Canadian to command the ISS when the crew of Expedition 34 departed in March 2013. On 12 May 2013 he turned over command of the ISS, and returned home aboard the Soyuz spacecraft on 13 May. He received significant media exposure during his time on the ISS, and ended his time on the station by paying tribute to David Bowie with a rendition of "Space Oddity". 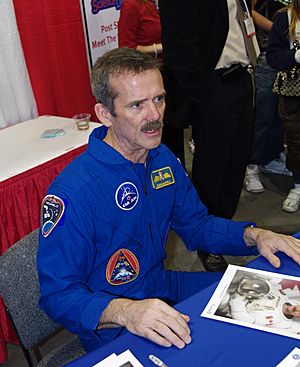 During his free time on Expedition 35, Hadfield recorded music for an album, using the Larrivée Parlor guitar previously brought to the ISS. The first song recorded in space, Jewel in the Night, was released via YouTube on Christmas Eve 2012. His collaboration with Ed Robertson of the Barenaked Ladies and the Wexford Gleeks, Is Somebody Singing? (sometimes shortened I.S.S.), was aired on the CBC Radio program Q and released by CBC Music online on 8 February 2013. Hadfield sang Is Somebody Singing along with singers across Canada for the national Music Monday program. Hadfield has been credited musically on his brother Dave Hadfield's albums. He also has performed with his brother the "Canada Song", which was released on YouTube on Canada Day, 2014.

On 12 May 2013, after handing over command of the ISS, but before returning home, Hadfield released a music video recorded on the ISS of a modified rendition of "Space Oddity" by David Bowie. As of January 2016[update] (shortly after Bowie's death), the video has over 35 million views on YouTube.

In October 2015, Hadfield released Space Sessions: Songs From a Tin Can, an album of songs that he had recorded on the International Space Station.

All content from Kiddle encyclopedia articles (including the article images and facts) can be freely used under Attribution-ShareAlike license, unless stated otherwise. Cite this article:
Chris Hadfield Facts for Kids. Kiddle Encyclopedia.