The General Post Office (GPO; Irish: Ard-Oifig an Phoist) in Dublin is the headquarters of the Irish Post Office, An Post, and Dublin's principal post office. Sited in the centre of O'Connell Street, the city's main thoroughfare, it is one of Ireland's most famous buildings, and was the last of the great Georgian public buildings erected in the capital.

The GPO was first located in a small building on the site of where the Commercial Buildings used to be (now the Central Bank building) off Dame Street, and was afterwards removed to a larger house opposite the Bank of Ireland building on College Green. On 6 January 1818, the new post-office in Sackville Street (now O'Connell Street) was opened for business. The foundation-stone of the building, which is built after a design of Francis Johnston, was laid by the Lord Lieutenant of Ireland, Charles Whitworth, 1st Earl Whitworth, on 12 August 1814, attended by the Post-Masters-General, Charles O'Neill, 1st Earl O'Neill and Laurence Parsons, 2nd Earl of Rosse. The structure was completed in the short space of three years for the sum of £50,000. 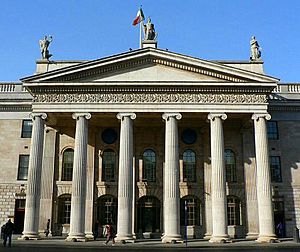 The Greek hexastyle portico of the General Post Office, completed in 1818. The Royal Coat of Arms, similar to those at King's Inns and the Irish Houses of Parliament, was removed after independence.

The front, which extends 67.1 metres (220 ft), has an Ionic portico (24.4 metres (80 ft) wide), of six fluted Ionic columns, 137.16 centimetres (54 inches) in diameter. The frieze of the entablature is highly enriched, and in the tympanum of the pediment were the royal arms until removed following restoration in the 1920s. On the acroteria of the pediment are three statues by John Smyth: when facing the building Mercury on the left, with his Caduceus and purse; Fidelity on the right, with a hound at her feet and a key held in her right hand (due to these features it is argued that the statue is in fact of Hecate); and Hibernia in the centre, resting on her spear and holding a harp. The entablature, with the exception of the architrave, is continued along the rest of the front; the frieze, however, is not decorated over the portico. A balustrade surmounts the cornice of the building, which is 15.2 metres (50 ft) from the ground.

With the exception of the portico, which is of Portland stone, the whole is of mountain granite. The elevation has three stories, of which the lower or basement is rusticated, and in this respect it resembles the India House of London, where a rusticated basement is introduced, although the portico occupies the entire height of the structure. 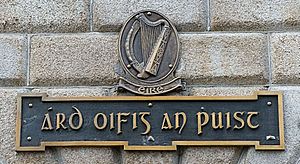 A sign on the external wall of the General Post Office, with the building's name (Irish: Árd-Oifig an Phuist) in traditional Gaelic script and using an older spelling that predates Irish orthography reforms of the 1960s.

During the Easter Rising of 1916, the GPO served as the headquarters of the uprising's leaders. The building was destroyed by fire in the course of the rebellion and not repaired until the Irish Free State government took up the task some years later. The facade is all that remains of the original building. An original copy of the Proclamation of the Irish Republic was on display in the An Post Museum at the GPO, where an exhibition, Letters, Lives & Liberty, highlighted the history of the Post Office and the GPO. The museum closed at the end of May 2015 being replaced by a new visitor centre to commemorate the 1916 Rising, 'GPO Witness History', in March 2016. The building has remained a symbol of Irish nationalism. In commemoration of the Rising, a statue depicting the death of the mythical hero Cúchulainn sculpted by Oliver Sheppard in 1911 was sited at the command post in the centre of the GPO main hall and is now housed in the front of the building. The statue was featured on the Irish ten shilling coin of 1966, marking the fiftieth anniversary of the Rising. Despite its fame as an iconic place of Irish freedom, ground rent for the GPO continued to be paid to English and American landlords until the 1980s.

The broadcasting studios of 2RN, which later became Radio Éireann, were located at the GPO from 1928 until 1974. Draws for Prize Bonds are held weekly, on Fridays, in the building.

Nelson's Pillar was formerly located in the centre of O'Connell Street adjacent to the GPO. However the Pillar was destroyed by Irish republicans in an explosion in 1966. The Spire of Dublin now takes a dominant position on the site of the Pillar.

All content from Kiddle encyclopedia articles (including the article images and facts) can be freely used under Attribution-ShareAlike license, unless stated otherwise. Cite this article:
General Post Office, Dublin Facts for Kids. Kiddle Encyclopedia.