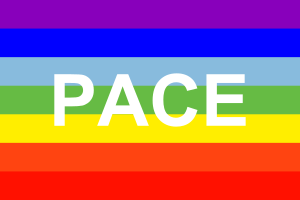 The rainbow flag is a multi-colored flag consisting of stripes in the colors of the rainbow that is displayed in many cultures around the world as a sign of diversity and inclusiveness. The German pastor Thomas Müntzer used a rainbow flag as a symbol of solidarity as early as the German Peasants' War of the 16th century. It is common as a symbol of the Peace movement, first used this way in a peace march in Italy in 1961.

In 1924 the Indian spiritual teacher Meher Baba designed a rainbow flag. It is flown each year near his tomb near Ahmednagar, India during the anniversary of his death on January 31, 1969. Baba explained the symbolism, saying, "The colors in the flag signify man's rise from the grossest of impressions of lust and anger – symbolized by red – to the culmination in the highest state of spirituality and oneness with God – symbolized by sky blue."

The rainbow is also a symbol in the Christian and Jewish Bible. It shows God's promise to Noah and his family to never cover the world in water again.

A Christian movement known as Cursillo, founded in 1944, uses these traditional rainbow symbols, including flags. Their version can have 5 to 7 colors, with red at the top, blue or purple at the bottom, and the Spanish words De Colores! ("of colors") in large letters on the front.

This rainbow flag in Italy was first used in a peace march in 1961, inspired by similar multi-coloured flags used in demonstrations against nuclear weapons. The most common variety has seven colours, purple, blue, light blue, green, yellow, orange and red, and is emblazoned in bold with the Italian word PACE, meaning "peace".

It has also been the symbol of the LGBT (lesbian, gay, bisexual, and transgender) community since it's creation in 1978. It is also called the 'Pride Flag.' The flag was created by Gilbert Baker of San Francisco, California in 1978.

All content from Kiddle encyclopedia articles (including the article images and facts) can be freely used under Attribution-ShareAlike license, unless stated otherwise. Cite this article:
Rainbow flag Facts for Kids. Kiddle Encyclopedia.