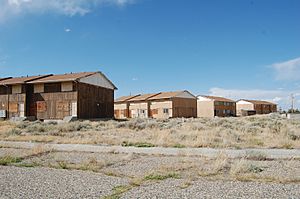 Jeffrey City is a former uranium mining boomtown located in Fremont County, in the central part of the U.S. state of Wyoming. The town is known in Wyoming and the American West as symbol of a boomtown that went "bust" very quickly, as the mine was shut down in 1982 and over 95% of the inhabitants left the town within three years. The population was 58 at the 2010 census, far lower than its onetime population of several thousand people. For statistical purposes, the United States Census Bureau has defined Jeffrey City as a census-designated place (CDP).

Jeffrey City began in 1931 as "Home on the Range", the 640-acre (2.6 km2) homestead of a Nebraska couple named the Petersons, who relocated because Mr. Peterson was sick after having been gassed in World War I. Mrs. Beulah Peterson (later Walker) opened two gas pumps when the highway came through, and began cooking for those who stopped. The post office at Split Rock, 14 miles (23 km) away, closed in 1943, and Mrs. Peterson took up the task of handling the ranchers' mail. She canceled the letters with "Home on the Range". She retired her post office cancellation stamp in 1957 when Home on the Range became Jeffrey City. Her family members are currently restoring the old Home on the Range post office site.

Home on the Range became Jeffrey City when those who came to mine uranium sought to honor Dr. C. W. Jeffrey, a wealthy doctor from Rawlins, Wyoming, who initially financed the costs for prospector and businessman Bob Adams to start the Western Nuclear Corporation mining firm and open a uranium mine near the area in 1957, during the Cold War and the height of uranium demand.

Thousands of people looking for high-paying mining jobs streamed into Jeffrey City, and Western Nuclear designed and financed a company town for the workers and their families. At the height of the boom town optimism, an extremely large high school was built that included an Olympic-sized swimming pool. In the late 1970s and early 1980s, the uranium market collapsed and the mine was forced to close. As was typical of many boom towns, Jeffrey City was singularly dependent on the local mine, and after it closed there was no reason for residents to remain. What was once a thriving local community with shops, schools, library, sheriff, youth hostel, churches, medical clinics and more, became a ghost town as 95% of the residents left the town by 1986. Today, few institutions remain: the First (Southern) Baptist Church (which is still doing well thanks to the area ranchers who attend), a restaurant and bar called the Split Rock Café that caters to the few local residents and those passing through on the highway, and Monkingbird Pottery, a pottery studio. The Green Mountain Motel provides perhaps the only lodging along the 122-mile (196 km) route between Rawlins and Riverton.

There were 45 households, out of which 15.6% had children under the age of 18 living with them, 66.7% were married couples living together, 2.2% or one household had a female householder with no husband present, and 26.7% were non-families. 17.8% of all households were made up of individuals, and 4.4% had someone living alone who was 65 years of age or older. The average household size was 2.36 and the average family size was 2.61.

Public education in the community of Jeffrey City is provided by Fremont County School District #1. In 2013 the school served kindergarten through 4th grade, and had two students. Prior to 1997 Jeffrey City had its own school district.

All content from Kiddle encyclopedia articles (including the article images and facts) can be freely used under Attribution-ShareAlike license, unless stated otherwise. Cite this article:
Jeffrey City, Wyoming Facts for Kids. Kiddle Encyclopedia.