Gillette is a city in and the county seat of Campbell County, Wyoming, United States. The population was estimated at 31,797 as of 1 July 2013. Gillette is centrally located in an area involved with the development of vast quantities of American coal, oil, and coalbed methane gas. The city calls itself the "Energy Capital of the Nation," noting that the state of Wyoming provides nearly 35% of the nation's coal. Over the last decade Gillette saw a population increase of 48% from the 2000 census of 19,646 residents.

Gillette was incorporated on January 6, 1892, less than two years after Wyoming became a state. The city was named after Edward Gillette, who worked as a surveyor for the Chicago, Burlington and Quincy Railroad. Companies based in Gillette include Cloud Peak Energy.

In 1974, U.S. psychologist ElDean Kohrs used the town as the basic example of what he called the 'Gillette Syndrome': the social disruption that can occur in a community due to rapid population growth. During the 1960s, Gillette doubled its population from 3,580 to 7,194 residents. Kohrs proposed that this fast increase of population caused the phenomenon known as Gillette Syndrome, resulting in increased crime, high costs of living and weakened social and community bonds.

There were 10,975 households of which 38.9% had children under the age of 18 living with them, 49.2% were married couples living together, 10.3% had a female householder with no husband present, 7.0% had a male householder with no wife present, and 33.5% were non-families. 24.3% of all households were made up of individuals and 4.7% had someone living alone who was 65 years of age or older. The average household size was 2.61 and the average family size was 3.09. 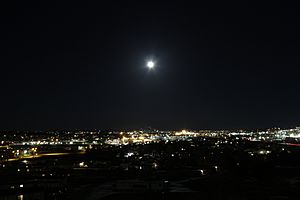 Gillette–Campbell County Airport (GCC) is served by Delta Air Lines, and by United Airlines operated by SkyWest Airlines. SkyWest currently operates 6 flights daily in and out of Gillette to hubs in Denver, and Salt Lake City.

The Wyoming Center, a 9,000 seat arena located at the CAM-PLEX just east of the city, was completed in 2008. The CAM-PLEX hosts events ranging from concerts and balls to the National High School Finals Rodeo.

The Campbell County Recreation Center is a 190,000 square foot facility that was established April 2010 and is a popular place for Gillette residents to visit. This new facility is a great place for physical activity and recreational sports. It includes a 42-foot climbing wall resembling the Devils Tower Monument. There is also an 81,000 square foot field house that contains a six-lane track and 5 indoor tennis courts.

The Energy Capital Sports Complex is Wyoming's premier softball facility. The site features four fast-pitch softball fields that can be converted for Little League baseball. The fields use Slitfilm synthetic turf with sand-rubber infill. There is a 28,000 square foot protected spectator viewing area with a grass play area. There is also a 2.4 mile recreation trail around the complex. Since the grand opening in 2015, the Energy Capital Sports Complex has hosted many tournaments including the Razor City Softball Tournament and the 2016 Wyoming ASA State Softball Tournament. 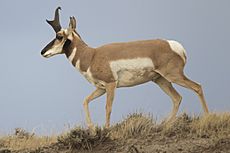 Pronghorn Antelope are plentiful in the Gillette area.

Devils Tower National Monument is a short hour drive from Gillette. This flat-top volcanic formation soars more than 1,200 feet above the ground and is a popular site to visit. Many people enjoy walking the 1.3 mile path around the entire monument while others love the thrill of climbing the formation.

Keyhole State Park is also a close 49 minute drive from Gillette that is a popular place to visit in both the summer and winter. Many residents enjoy the reservoir during the summer by camping, hiking, and engaging in water sports. During the winter many people ice fish at keyhole which is excellent fishing for walleye, catfish, small mouth bass, and northern pike. Another fun winter sport you can find people doing around keyhole is snowmobiling.

Gillette is a midway point between the Bighorn Mountains and the Black Hills, and has a somewhat close proximity to both.

All content from Kiddle encyclopedia articles (including the article images and facts) can be freely used under Attribution-ShareAlike license, unless stated otherwise. Cite this article:
Gillette, Wyoming Facts for Kids. Kiddle Encyclopedia.