Acer negundo, the box elder, boxelder maple, Manitoba maple or ash-leaved maple, is a species of maple native to North America. It is a fast-growing, short-lived tree with opposite, compound leaves. It is sometimes considered a weedy or invasive species, and has been introduced to and naturalized throughout much of the world, including in South America, Australia, New Zealand, South Africa, much of Europe, and parts of Asia.

Indicative of its familiarity to many people over a large geographic range, A. negundo has numerous common names. The names "box elder" and "boxelder maple" are based upon the similarity of its whitish wood to that of boxwood and the similarity of its pinnately compound leaves to those of some species of elder.

Other common names are based upon this maple's similarity to ash, its preferred environment, its sugary sap, a description of its leaves, its binomial name, and so on. These names include "Manitoba maple", "ash-leaf maple", "cut-leaved maple", "three-leaf maple", "ash maple", "sugar maple", "negundo maple", and "river maple".

Names vary regionally. Box elder, boxelder maple, ash-leaved maple, and maple ash are among its common names in the United States. In Canada it is commonly known as Manitoba maple and occasionally as elf maple. in the British Isles it is known as box elder or ashleaf maple. In Russia it is known as American maple (Russian: америка́нский клён, tr. amerikansky klyon) as well as ash-leaf maple (Russian: клён ясенели́стный, tr. klyon yasenelistny).

Acer negundo is a fast-growing and fairly short-lived tree that grows up to 10–25 m (35–80 ft) tall, with a trunk diameter of 30–50 cm (12–20 in)}, rarely up to 1 m (3.3 ft)} diameter. It often has several trunks and can form impenetrable thickets. The typical lifespan of box elder is only 60 years. Under exceptionally favorable conditions, it may live to 100 years.

The shoots are green, often with a whitish to pink or violet waxy coating when young. Branches are smooth, somewhat brittle, and tend to retain a fresh green color rather than forming a bark of dead, protective tissue. The bark on its trunks is pale gray or light brown, deeply cleft into broad ridges, and scaly.

Unlike most other maples (which usually have simple, palmately lobed leaves), Acer negundo has pinnately compound leaves that usually have three to seven leaflets. Simple leaves are also occasionally present; technically, these are single-leaflet compound leaves. Although some other maples (such as Acer griseum, Acer mandshuricum and the closely related A. cissifolium) have trifoliate leaves, only A. negundo regularly displays more than three leaflets. The leaflets are about 5–10 cm (2–4 in)} long and 3–7 cm (1 1⁄4–2 3⁄4 in)} wide with slightly serrate margins. Leaves have a translucent light green color and turn yellow in the fall.

The yellow-green flowers are small and appear in early spring, with staminate flowers in clusters on slender pedicels and pistillate flowers on drooping racemes 10–20 cm (4–8 in)} long.

Unlike most other maples, A. negundo is fully dioecious and both a male and female tree are needed for reproduction to occur.

A few botanists treat boxelder maple in its own distinct genus (Negundo aceroides) but this is not widely accepted.

Acer negundo is often divided into three subspecies, each of which was originally described as a separate species. These are:

Some authors further subdivide A. negundo subsp. negundo into a number of regional varieties but these intergrade and their maintenance as distinct taxa is disputed by many. Even the differences between recognized subspecies are probably a matter of gradient speciation. 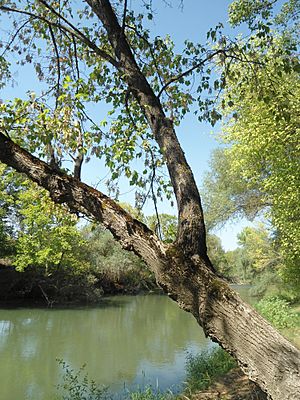 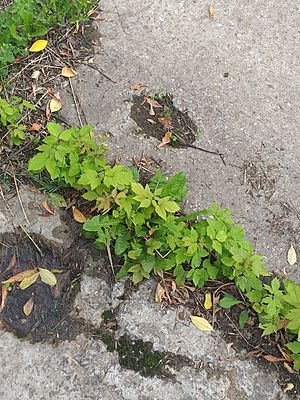 Growing as a weed in pavement crack in Russia

Acer negundo is native across much of the United States and Canada, and can be found as far south as Guatemala.

Although native to North America, it is considered a weedy species in some areas, such as in parts of the Northeastern United States, and has increased greatly in these areas. In 1928, Joseph Illick, chief forester for the state of Pennsylvania, wrote in Pennsylvania Trees that box elder was "rare and localized" in the state. After World War II, box elder's rapid growth made it a popular landscaping tree in suburban housing developments despite its poor form, vulnerability to storm damage, and tendency to attract large numbers of box elder bugs. Intentional cultivation has thus made the tree far more abundant than it once was.

It can quickly colonize both cultivated and uncultivated areas and the range is therefore expanding both in North America and elsewhere. In Europe where it was introduced in 1688 as a park tree it is able to spread quickly and is considered an invasive species in parts of Central Europe, including Germany, the Czech Republic, Hungary, Slovenia, and Poland) where it can form mass growth in lowlands, disturbed areas, and riparian biomes on calcareous soils. It has also become naturalized in eastern China and can be found in some of the cooler areas of the Australian continent where it is listed as a pest invasive species.

This species prefers bright sunlight. It often grows on flood plains and other disturbed areas with ample water supply, such as riparian habitats. Human influence has greatly favored this species; it grows around houses and in hedges, as well as on disturbed ground and vacant lots. 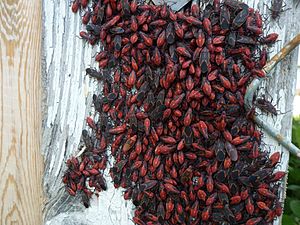 Several birds and some squirrels feed on the seeds. The evening grosbeak uses them extensively.

The boxelder bug (Boisea trivittata) lays its eggs on all maples, but prefers this species, clustering the eggs in bark crevices. The rosy maple moth (Dryocampa rubicunda) also lays its eggs on the leaves of maple trees, including Acer negundo. The larvae feed on the leaves, and in very dense populations can cause defoliation.

Small galls are formed on the leaves by a bladder mite, Aceria negundi. A gall midge, Contarinia negundinis joins and enlarges the galls of Aceria negundi. The midge sometimes creates a separate, tubular gall on the midrib or veins of the undersides of the leaves. 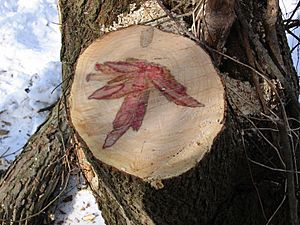 Although its light, close-grained, soft wood is considered undesirable for most commercial uses, this tree has been considered as a source of wood fiber, for use in fiberboard. There is also some commercial use of the tree for various decorative applications, such as turned items (bowls, stem-ware, pens). Such purposes generally use burl or injured wood, as the injured wood develops a red stain.

The wood has been used for a variety of purposes by Native Americans, such as by the Navajo to make tubes for bellows, by the Cheyenne to make bowls, and by the native peoples of Montana who use the large trunk burls or knots to make bowls, dishes, drums, and pipe stems. The Tewa use the twigs as pipe stems and the Keres make the twigs into prayer sticks.

The Dakota people and the Omaha people make the wood into charcoal, which is used in ceremonial painting and tattooing. The Kiowa burn the wood in the altar fire during the peyote ceremony.

Acer negundo was identified as the material used in the oldest extant wood flutes from the Americas. The flutes, excavated by Earl H. Morris in 1931 in Northeastern Arizona, have been dated to 620–670 CE.

Acer negundo has been used by Native Americans for several medicinal purposes. The Cheyenne burn the wood as incense for making spiritual medicines, and during Sun Dance ceremonies. The Meskwaki use a decoction of the inner bark as an emetic, and the Ojibwa use an infusion of the inner bark for the same purpose.

The sap has been used to make syrup by Native Americans, including the Dakota, Omaha, Pawnee, the Ponca, Winnebago, Cree, Sioux, and the indigenous people of Montana. The Chiricahua and Mescalero Apache dry scrapings of the inner bark and keep it as winter food, and they also boil the inner bark until sugar crystallizes out of it. The Cheyenne mix the boiled sap with shavings from the inner sides of animal hides and eat them as candy. The Ojibwa mix the sap with that of the sugar maple and drink it as a beverage. 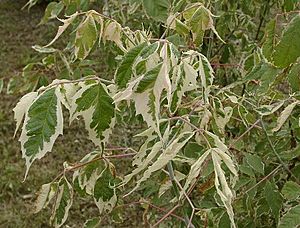 Although its weak wood, irregular form, and prolific seeding might make it seem like a poor choice for a landscape tree, A. negundo is one of the most common maples in cultivation and many cultivars have been developed, such as: 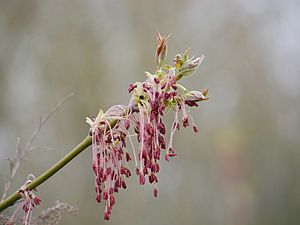 A protoxin present in the seeds of Acer negundo, hypoglycin A, has been identified as a major risk factor for, and possibly the cause of, a disease in horses, seasonal pasture myopathy (SPM). It is analogous to Jamaican vomiting sickness in humans, also caused by hypoglycin A.

Acer negundo pollen is a severe allergen. Pollen is released in winter or spring, varying with latitude and elevation.

All content from Kiddle encyclopedia articles (including the article images and facts) can be freely used under Attribution-ShareAlike license, unless stated otherwise. Cite this article:
Box elder Facts for Kids. Kiddle Encyclopedia.