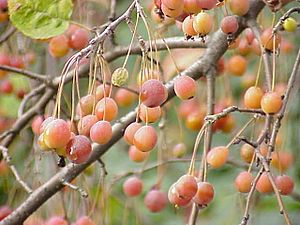 Malus sikkimensis fruit on the tree. 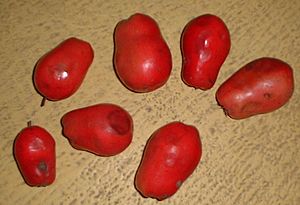 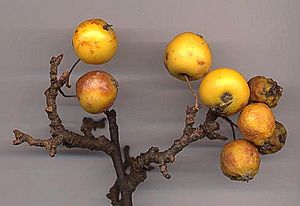 Crabapple fruit are mostly red, but some, such as this cultivar 'Golden Hornet', are yellow

Malus is a genus of about 30–35 species of small deciduous apple trees or shrubs in the family Rosaceae. Other studies say it includes 55 species, including the domesticated orchard apple, or table apple as it used to be called. The other species and subspecies are generally known as "wild apples", "crab apples", "crabapples" or "crabs".

The genus is native to the temperate zone of the northern hemisphere, in Europe, Asia and North America.

Apple trees are small, usually 4–12 m tall when full grown. The leaves are 3–10 cm long, positioned opposite from each other. They have a simple shape with a saw-tooth edge. The flowers come from corymbs, and have five petals, which may be white, pink or red, with usually red stamens that produce lots of pollen, and an ovary which is below them. Flowering takes place in the spring and pollination is by insects (typically bees, which freely visit the flowers for both nectar and pollen).

The fruit of the other species is not an important crop in most areas because they are very sour and (in some species) very like wood, and are rarely eaten raw for this reason. However, crabapples are an excellent source of pectin, and their juice can be made into a ruby-coloured jelly. Some kinds of crab apples make good applesauce.

Crabapples are widely grown as trees for the pleasure of their appearance, grown for their beautiful flowers or fruit. There are cultivars selected for these qualities and for resistance to disease.

Some crab apples are used as rootstocks for domestic apples to stand up to cold or drought.

They are also used as tree for pollinating food apple trees in apple orchards. Varieties of crab apple are selected to bloom at the same time as the apple trees in an orchard, and the crabs are planted every sixth or seventh tree, or limbs of a crab tree are grafted onto some of the apple trees. See also Fruit tree pollination.

Because of the many blossoms and small sized fruit, crab apples are popular for use in bonsai. Because the trees are small due to the needs of the hobby, but still show the abundant fruit bearing of full-sized crab apples, it is important to thin out fruit so that trees do not stress themselves.

Apple wood "makes a wonderfully luxurious firewood with a lovely scent [smell], and smoke from an apple wood fire gives a most excellent flavour to smoked foods," including Applewood cheese.

All content from Kiddle encyclopedia articles (including the article images and facts) can be freely used under Attribution-ShareAlike license, unless stated otherwise. Cite this article:
Malus Facts for Kids. Kiddle Encyclopedia.