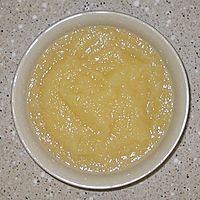 A bowl of applesauce

Applesauce (or apple sauce) is a sauce that is made from stewed and mashed apples. Peeled or unpeeled apples can be used and different spices or additives like cinnamon can be used. Sugar or high fructose corn syrup is sometimes added to the applesauce to sweeten it. Applesauce can be fine or coarse textured, and can include large pieces of apple. It is easy to make at home, and it is also sold already made in supermarkets as a common food or as a snack for children and people who have false teeth or other problems with eating solid food. Parents often feed it to their babies because teeth are not needed to eat it.

In the United Kingdom, apple sauce is normally used as a sauce for ham, pork, and gammon.

Since it is high in pectin (more of which can be added during the cooking process), apple sauce is a homemade remedy to combat diarrhea. Apple sauce is thus a component of the regimen devised to help children with diarrhea and stomach problems, also known as the BRAT diet: bananas, rice, apple sauce, and toast.

All content from Kiddle encyclopedia articles (including the article images and facts) can be freely used under Attribution-ShareAlike license, unless stated otherwise. Cite this article:
Applesauce Facts for Kids. Kiddle Encyclopedia.