Kids Encyclopedia Facts
For the Shoshone chief that the city is named after, see Pocatello (Shoshone leader).

Pocatello is the county seat of and largest city in Bannock County, with a small portion on the Fort Hall Indian Reservation in neighboring Power County, in the southeastern part of the U.S. state of Idaho. It is the principal city of the Pocatello metropolitan area, which encompasses all of Bannock County. As of the 2010 census the population of Pocatello was 54,255.

Pocatello is the fifth-largest city in the state, just behind Idaho Falls. In 2007, Pocatello was ranked twentieth on Forbes list of Best Small Places for Business and Careers. Pocatello is the home of Idaho State University and the manufacturing facility of ON Semiconductor. The city is at an elevation of 4,462 feet (1,360 m) above sea level and is served by the Pocatello Regional Airport.

Pocatello experiences a semi-arid climate (Köppen BSk), with winters that are moderately long and cold, and hot, dry summers.

The religious affiliation is as follows:

Gateway to the Northwest

Founded in 1889, Pocatello was known as the "Gateway to the Northwest." As pioneers, gold miners and settlers traveled the Oregon Trail, they passed through the Portneuf Gap south of town. Stage and freight lines and the railroad soon followed, turning the community into a trade center and transportation junction.

The name "Pocatello" comes from an Indian chief of the Shoshone tribe who granted the railroad a right-of-way through the Fort Hall Indian Reservation.

Shoshone and Bannock Indian tribes inhabited southeastern Idaho for hundreds of years before the epic trek by Lewis and Clark across Idaho in 1805. Their reports of the many riches of the region attracted fur trappers and traders to southeastern Idaho.

Nathaniel Wyeth of Massachusetts established one of the first permanent settlements at Fort Hall in 1834, which is only a few miles northeast of Pocatello. When over-trapping and a shift in fashion to silk hats put an end to the fur trade, Fort Hall became a supply point for immigrants traveling the Oregon Trail.

Although thousands of immigrants passed through Idaho, it was not until the discovery of gold in 1860 that attracted settlers in large numbers to Idaho. The gold rush brought a need for goods and services to many towns, and the Portneuf Valley, home of Pocatello, was the corridor initially used by stage and freight lines. The coming of the railroad provided further development of Idaho's mineral resources and "Pocatello junction" became an important transportation crossroads as the Union Pacific Railroad expanded its service.

After the gold rush played out, the settlers who remained turned to agriculture. With the help of irrigation from the nearby Snake River, the region became a large supplier of potatoes, grain and other crops. Residential and commercial development gradually appeared by 1882.

The Pocatello flag is considered by the North American Vexillological Association as the worst city flag in North America. In April 2016, the city's newly created flag design committee met for the first time. Attending the meeting was Roman Mars - whose 2015 TED Talk made Pocatello's flag famous. 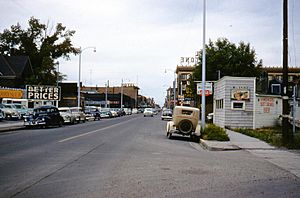 The Federal Bureau of Investigation is building a data center in Pocatello as part of an initiative to consolidate operations into three enterprise data centers.

According to Pocatello's 2014 Comprehensive Annual Financial Report, the top employers in the city are:

Western Pocatello in 2009,
from Red Hill on the ISU campus 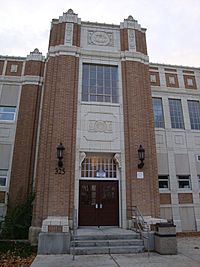 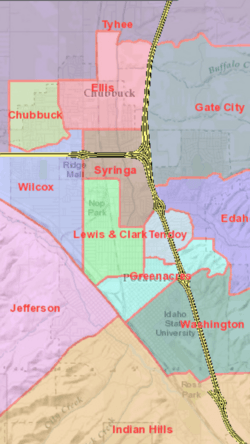 Idaho State University (ISU) is a public university operated by the state of Idaho. Originally an auxiliary campus of the University of Idaho and then a state college, it became the second university in the state in 1963. The ISU campus is in Pocatello, with outreach programs in Coeur d'Alene, Idaho Falls, Boise, and Twin Falls. The university's 123,000-square-foot (11,400 m2) L.E. and Thelma E. Stephens Performing Arts Center occupies a prominent location overlooking Pocatello and the lower Portneuf River Valley. The center's three venues provide performance space, including the Joseph C. and Cheryl H. Jensen Grand Concert Hall. Idaho State's athletics teams compete in the Big Sky Conference, the football and basketball teams play in Holt Arena.

Pocatello is home to Holt Arena, a multipurpose indoor stadium that opened in 1970 on the ISU campus. Known as the "Minidome" until 1988, Holt Arena was the home of the Real Dairy Bowl, a junior college football Bowl game. Holt Arena also plays host to the Simplot Games, the nation's largest indoor high school track-and-field meet.

The Pocatello Marathon and Half Marathon are held annually. Times from the course may be used to qualify for the Boston and New York marathons.

Outdoor sports, both winter and summer, play an important role in the culture of Pocatello. Pebble Creek, Idaho is a ski resort located just south of Pocatello and offers skiing and snowboarding.

Pocatello is also home to a semi-pro baseball team, the Gate City Grays, who are a member of the Northern Utah League. The Grays play in Halliwell Park located at 1100 W. Alameda. They were NUL champions in both 2015 and 2016.

All content from Kiddle encyclopedia articles (including the article images and facts) can be freely used under Attribution-ShareAlike license, unless stated otherwise. Cite this article:
Pocatello, Idaho Facts for Kids. Kiddle Encyclopedia.