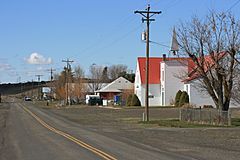 Benge main street as seen from the East

Benge is an unincorporated community in Adams County, Washington, in the United States. Because it is not tracked by the U.S. Census, a Census population estimate is not available. Benge is assigned the ZIP code 99105. The town is served by the Benge School District, and downtown Benge contains Benge Elementary School.

The Mullan Military Road, started in 1859 by Lieutenant John Mullan, connected the upper navigable Missouri River with the Columbia River. This 624-mile road, which passed through what was later to become the town of Benge, was completed in 1862 at a cost of $280,000. The Benge section of the road was completed on May 22, 1861; the wagon ruts were still visible in 2008 just northeast of town at the site of the First Benge School. Although built as a military road, it was used by civilians for both travelers and cargo transport until the Northern Pacific Railroad was completed in 1883.

The town is named after Frank H. Benge, who represented Adams County in the State Legislature in 1904. Benge and his wife donated the land upon which the town site was platted on May 13, 1907.

Frank & Mary Crouch Benge and daughters came to Adams County in 1892. They had lived on the current site of Benge for 15 years when the Spokane, Portland and Seattle Railway surveyed the rail line to pass right through their ranch house. The Benges were paid $5,000 to move their house. They built an 11-room house with the rock excavated from a nearby rail cut. The house became a boarding house and served as a community center for a number of years.

All content from Kiddle encyclopedia articles (including the article images and facts) can be freely used under Attribution-ShareAlike license, unless stated otherwise. Cite this article:
Benge, Washington Facts for Kids. Kiddle Encyclopedia.