The name of the town comes from a Kalispel word, sč̓ewíleʔ, meaning "watersnake" or "gartersnake". Alice Sherwood Abrahamson stated that "The name Chewelah comes from the Indian word "S che wee leh", meaning water or garter snake. There was a spring in what is now the southwest end of Chewelah. The old McCreas lived there, and their homestead was called "Sche wee leh ee" for the spring bubbled up there. The motion of the water gave the illusion of snakes moving about in the water." Prior to colonization by European-Americans, Chewelah was home to a band of the Kalispel people. The band was known as the slet̓éw̓si, meaning "valley people". Originally, the area was called Fool's Prairie, after the Kalispel Indian who left his own tribe because of a dispute. Chewelah and the rest of the Colville River Valley were part of the Colville Indian Reservation from April 9, 1872, when the reservation was created, until July 2, 1872, when a subsequent executive order reduced the size of the reservation. The Chewelah Band of Indians is currently part of the Spokane Tribe.

Thomas and Mary Brown moved to the Fool's Prairie in 1859. On May 8, 1872, Thomas Brown received authority to establish a post office named Chewelah. The name was first used in Stevens County Commissioner Journals on May 6, 1872. That post office disbanded in February 23, 1875. In 1879, the post office was reestablished with Major John Simms, Indian Agent, as postmaster. Chewelah was officially incorporated on February 4, 1903.

Chewelah is a town of firsts in Stevens County. It had the first Protestant Congregational Church in 1891, the first school in 1869, the Spokane Falls and Northern Railroad arrived in 1889, a Catholic church was established in 1885, and the first county newspaper was founded in July 1885.

Initially Chewelah was a typical pioneer settlement, being an agricultural center as far back as the early 1870s and having its share of prospectors working the adjacent countryside as early as 1842. The town was platted in 1884 and became known for being a rough and tumble mining town; the first lead and silver mines were established around 1886, and others followed in Embry and surrounding areas.

By 1905 the population had reached 650 souls, and within a few years many prosperous copper, silver, lead, and a few gold mines were flourishing in the area. The most successful ore mined in Chewelah was magnesite. This mineral was used for making bricks and furnace linings that could withstand high temperatures. Magnesite was also an important ingredient for making high-quality steel that was in high demand during World War I. Austria had previously been the main provider of magnesite for the country, but production was interrupted by the War. By 1916 Chewelah's plant was said to be the largest producer of magnesite in the country, and at full production was the largest producer in the world, shipping some 700 tons daily. During the war there were as many as 800 people working at the plant making high temperature-resistant refractory brick.

By 1920 Chewelah's population had grown to 1,600 people and continued to prosper until the late 1960s. In 1968 the magnesite plant closed down due to cheaper competition from Japan and changes in the steel industry. Despite this major change, Chewelah survived the transition from being a "one-company town," and today Chewelah has several thousand residents and displays a pleasant blend of the past and future. With its moderate climate, dry land, and irrigated farming, ranching and dairy farming continue to be mainstays. Chewelah's diversified economy also includes a ski area and golf course, among other industries. 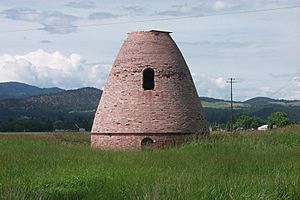 According to the United States Census Bureau, the city has a total area of 2.98 square miles (7.72 km2), all land.

This climatic region is typified by large seasonal temperature differences, with warm to hot (and often humid) summers and cold (sometimes severely cold) winters. According to the Köppen Climate Classification system, Chewelah has a humid continental climate, abbreviated "Dfb" on climate maps.

All content from Kiddle encyclopedia articles (including the article images and facts) can be freely used under Attribution-ShareAlike license, unless stated otherwise. Cite this article:
Chewelah, Washington Facts for Kids. Kiddle Encyclopedia.