Winthrop is a town in Okanogan County, Washington, United States. It is east of Mazama and north of Twisp. The population of the Winthrop area was 1,916 at the 2000 census; however, the incorporated town had a population of 349. The 2010 census showed an increase to 394 within the town limits. 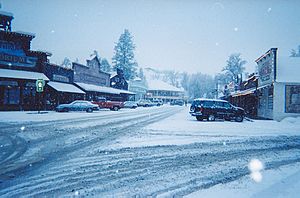 The town of Winthrop on a snowy day.

Winthrop was officially incorporated on March 12, 1924. Native Americans were the first inhabitants of Winthrop. They lived along the banks of the Methow, Twisp, and Chewuch rivers, digging camas root, picking berries, fishing and hunting. The first white men to visit the valley were trappers in the 19th century.

In the spring of 1868, placer gold was discovered in the Slate Creek District.

In 1883, the lure of gold brought the first permanent white settlers, three of whom were James Ramsey, Ben Pearrygin, and Guy Waring. Waring stopped at the forks of the Chewuch and Methow rivers in 1891. His family settled into the "Castle" (now the Shafer Museum). Although Waring is the acclaimed founding father, the town is named after Theodore Winthrop, a Yale graduate, adventurer/traveler and gifted 19th century author. The town was rebuilt after a devastating fire in 1893. Waring's original Duck Brand Saloon was built in 1891. It survived the fire and is now Winthrop's Town Hall.

In 1894, a flood carried away the bridge at the north fork of the river at Winthrop. Colonel Tom Hart rebuilt the bridge in 1895 at Slate Creek. The industry of Winthrop at this time consists of a well-equipped saw mill, several important dairies, raising cattle, and supplying the local mines with goods.

By 1915, most of the mines, except for a few in the Slate Creek area, had shut down.

In 1972, when State Highway 20 was nearing completion over the North Cascades, several business people began planning for travelers passing through the town. They agreed to the idea of a western-themed restoration which still exists.

In 2012, Winthrop was ranked #2 in a National Motorists Association listing of its "Worst Speed Trap Cities" in North America (qualification of a population less than 50,000). 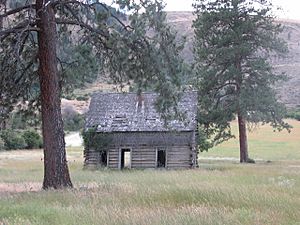 Winthrop is known for the American Old West design of all the buildings in town, making it a tourist destination. The town theme idea was inspired by the example of Leavenworth, Washington, which in turn was heavily based on Solvang, California. Winthrop is a popular cross-country skiing site, with over 120 miles (200K) of groomed trails., Other popular activities include rock climbing, hiking, mountain biking, river rafting, horse-back riding, hunting and fishing, golfing, spectacular sight-seeing and other outdoor activities. Events include the Winthrop Rhythm and Blues Festival, the Methow Valley Chamber Music Festival, live theatre and many art galleries.

Winthrop is home to the oldest legal saloon in Washington state.

The North Cascades National Park—with its pristine forests and stunning views—borders to the west.

A smokejumper base is also nearby, located between Winthrop and the nearby town of Twisp.

According to the United States Census Bureau, the town has a total area of 0.94 square miles (2.43 km2), all of it land. Winthrop has a lake, called Pearrygin Lake, that is a popular swimming hole as well. Like most of the Inland Northwest, Winthrop experiences a humid continental climate (Köppen Dsb), with cold, snowy winters and very warm summers with cool nights and little rainfall. Winthrop and Mazama recorded the coldest temperature ever measured in Washington state at –48 °F (–44.4 °C) on December 30, 1968. The hottest temperature recorded in Winthrop was 106 °F (41.1 °C) on 27 July 1939, but frosts can occur even in summer. 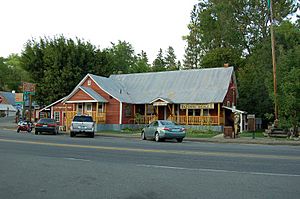 There were 205 households of which 22.0% had children under the age of 18 living with them, 40.0% were married couples living together, 9.8% had a female householder with no husband present, 3.4% had a male householder with no wife present, and 46.8% were non-families. 43.4% of all households were made up of individuals and 16.6% had someone living alone who was 65 years of age or older. The average household size was 1.92 and the average family size was 2.59.

There were 185 households out of which 23.2% had children under the age of 18 living with them, 40.0% were married couples living together, 11.4% had a female householder with no husband present, and 45.4% were non-families. 40.0% of all households were made up of individuals and 15.1% had someone living alone who was 65 years of age or older. The average household size was 1.89 and the average family size was 2.50.

All content from Kiddle encyclopedia articles (including the article images and facts) can be freely used under Attribution-ShareAlike license, unless stated otherwise. Cite this article:
Winthrop, Washington Facts for Kids. Kiddle Encyclopedia.