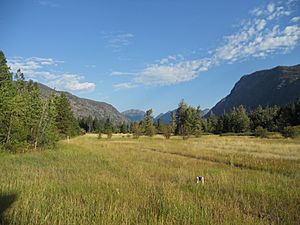 A small meadow near the cabins in Mazama

Mazama ( mə-ZAM-ə) is an unincorporated community in Okanogan County (population 200) located in the Methow Valley of Washington, on the east slopes of the North Cascades and North Cascades National Park. It is located along the North Cascades Highway (Highway 20), 14 miles (23 km) northwest of Winthrop and about 28 miles (45 km) south of the Canada–United States border. Mazama's town center elevation is 2,106 feet (642 m), and it is located 2.7 miles (4.3 km) south of and 4,895 feet (1,492 m) below Goat Peak.

Founded around the beginning of the twentieth century, Mazama boomed as the departure point for mining towns in the rugged Harts Pass area, such as Barron, Chancellor, and Robinson. Recently considered little more than a crossroads, Mazama is slowly growing to include several lodging options, a general store, a recreational supplies store, a gas station, a café, and three restaurants. It has been a destination for summer weddings, rock climbing, mountaineering, and winter sports with options for heli-skiing, back-country and cross country skiing. It is home to one of the world’s longest cross-country skiing trails, stretching for 120 miles (190 km) and running through the settlement.

In the 19th century the town was called "Goat Creek", after a creek at the base of nearby Goat Peak (then called Goat Mountain). When the former post office was secured in 1899, the settlers chose a name they thought was Greek for "mountain goat". They later discovered that they had looked in the wrong dictionary and, according to Edmond S. Meany, the meaning of "Mazama" was "mountain goat" in Spanish, not Greek. Mazama is a genus of deer (family Cervidae) comprising the Brockets, medium to small deer that are found in the Americas. The genus name Mazama is derived from Nahuatl mazame, the plural of mazatl "deer."

Locally, the name is pronounced to rhyme with "Alabama": mə-ZAM-ə. This is not the same as Oregon’s Mount Mazama, pronounced with a broader central vowel: mə-ZAH-mə. 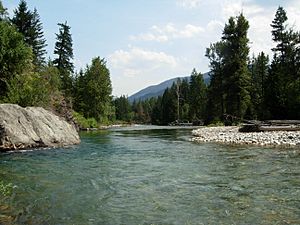 The Methow River at Mazama

The Methow River flows immediately to the south of Mazama, where it provides spawning habitat to spring Chinook salmon.

Forests of native Douglas-fir and Ponderosa pine are widespread in Mazama and its surroundings. Aspen and Cottonwood become increasingly common along creeks and rivers.

Over seventy species of mammals are indigenous to the area. This includes the Northern pocket gopher, but ironically, not the Mazama pocket gopher.

Mazama has a humid continental climate (Köppen Dsb) with warm, dry summers, and cold, snowy winters. It lies immediately leeward of the North Cascades, which trap much of the precipitation carried from the Pacific Ocean by prevailing westerly winds. This rain shadow strengthens with increasing distance from the Cascade crest: arid Winthrop, 14 miles further downvalley, receives a little over half the annual precipitation of Mazama. Mazama’s relatively heavy snowfall, along with the brief hours of winter daylight in a deep mountain valley, inspired the first settlers to nickname the area "Early Winters."

The average seasonal snowfall for the Mazama area is 119.7 inches, with an average of 136 days per year having at least 1 inch of snow on the ground. The greatest snow depth at any one time during the period of record, 62 inches, was recorded on January 1, 1997.

Soils are characteristically Leiko stony ashy sandy loam. Rock types in surrounding areas include Cretaceous Andesite, and Quaternary Alluvium which is mostly in the valley.

The Goat wall and other nearby cliffs have attracted many climbers to this small town. The goat wall at its highest is just under 2,000 feet (610 m) and is considered to be one of the best multipitch sport climbing areas in Washington. In all there's over 70 established routes in the Mazama vicinity. Routes range in difficulty from class 5.6 to class 5.13 and, one pitch climbs to twelve pitch climbs.

All content from Kiddle encyclopedia articles (including the article images and facts) can be freely used under Attribution-ShareAlike license, unless stated otherwise. Cite this article:
Mazama, Washington Facts for Kids. Kiddle Encyclopedia.