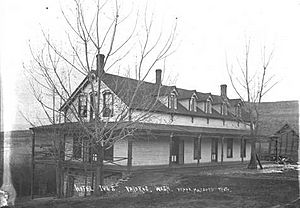 Pateros was originally established as Ive's Landing in around 1886 by Lee Ives. Ives began farming the area near the confluence of the Methow and Columbia Rivers, with around 50 teepees of Native Americans and 20 Chinese miners also inhabiting the area. The first post office was built in 1895.

In 1900, Charles Nosler acquired most of the townsite. He renamed the town to Pateros, after a town in the Philippines he previously visited. In 1903, the city consisted of four commercial establishments and nine residences and the town was sold to J.C. Steiner. Steiner vigorously promoted the town, making Pateros the principal rail shipping point between Oroville and Wenatchee. Pateros was officially incorporated on May 1, 1913.

Wells Dam was constructed on the Columbia River several miles downstream from Pateros in 1967. Wells Dam is one of the many hydroelectric dams present on the upper Columbia River including Grand Coulee Dam, Chief Joseph Dam, Rocky Reach Dam, Rock Island Dam, Wanapum Dam, and Priest Rapids Dam. The reservoir created by the Wells Dam is named Lake Pateros and flooded much of the original city.

Much of Pateros was destroyed by the Carlton Complex wildfire on July 17 and 18, 2014. No injuries or fatalities were reported, but at least 95 homes in the area were reported destroyed, along with at least one business.

According to the United States Census Bureau, the city has a total area of 0.49 square miles (1.27 km2), all of it land.

This climatic region is typified by large seasonal temperature differences, with warm to hot (and often humid) summers and cold (sometimes severely cold) winters. According to the Köppen Climate Classification system, Pateros has a humid continental climate, abbreviated "Dfb" on climate maps.

There were 238 households of which 39.1% had children under the age of 18 living with them, 52.1% were married couples living together, 10.5% had a female householder with no husband present, 5.5% had a male householder with no wife present, and 31.9% were non-families. 26.5% of all households were made up of individuals and 12.2% had someone living alone who was 65 years of age or older. The average household size was 2.76 and the average family size was 3.27.

Pateros is located in north central Washington and is in Okanogan County. Pateros has a population of 624 according to city data in 2009. However, during mid-July, thousands show up for Pateros’s annual Apple Pie Jamboree. There are events like Dragon boat races, basketball tournaments, and of course eating apple pie. Pateros will celebrated their sixty-fourth anniversary of Apple Pie Jamboree in 2011. Apple Pie Jamboree is a fun event for locals and “coasties” to participate in fun events that the proceeds from registration fees go to local students, clubs, and community groups. This is an event locals and vendors look forward to all year.

Dragon Boat Races: Multiple teams sign up and start training early to be in the Dragon Boat Races. Some business make use it as advertising, having employees represent the business in a fun work event. Twenty people row and to keep everyone rowing in rhythm, most of the time the smallest member of the team, beats a drum. These boats look like something from an Asian tradition and bring a unique sense to the City of Pateros. The racecourse is eight hundred and twenty feet, the team with the best time out of three tries receives metals. Practices are held a week before the races to help the team build a strong rhythm.

3 on 3 and Other Activities: The 3 on 3 basketball tournament starts on the Saturday of the Jamboree at eight am, and goes until all the teams have played. The tournament is open to age groups anywhere from third grade to adult. A golf tournament goes on up at the Alta Lake golf course just five miles out of Pateros. Other activities such as the Jamboree Jog, bass tournament, a parade, quilt show, and the Wenatchee Youth Circus. A new addition to the 2012 Jamboree will be Jet Ski Races. Some of the world’s best jet skiers will be demonstrating their skills on Saturday and Sunday during the Jamboree. High jumps and back flips in the air are going to be the beginning of excitement for these freestyle racers.

Apple Pie and KFC: Apple pie is the heart of the whole event so an Apple Pie Baking Contest is the motivation to cook pies. There is a one hundred dollar prize for adult first prize and twenty dollars for the youth division. Slices of apple pie are then sold and all the money goes back to the community and students of Pateros. Also the senior class of Pateros High School does an annual KFC dinner fundraiser for their senior trip. It costs eight dollars and it’s a nice addition to the fun food, unique vendors and merchants.

In mid-August Tacoma Inboard Racing Association hosts the “Pateros Hydro Classic.” Each year racers come from all over the country to race on Lake Pateros. Hydroplanes fly at speeds up to one hundred and forty miles per hour. They are powered by eight cylinders and are so loud the whole town can hear them. A mile and a quarter liquid oval course is tight for fifty hydroplanes fighting for the gold. The race starts at ten thirty in the morning. Fans watch from the grassy park on the side of the lake which is really the Columbia River. A fireworks display is the finale of a long day of races on the Lake.

All content from Kiddle encyclopedia articles (including the article images and facts) can be freely used under Attribution-ShareAlike license, unless stated otherwise. Cite this article:
Pateros, Washington Facts for Kids. Kiddle Encyclopedia.