Nooksack ( NUUK-sak) is a city in Whatcom County, Washington, 8 km (5.0 mi) south of the border with Canada. The population was 1,338 at the 2010 census. Despite the name, it is actually located right next to the upper stream of the Sumas River, and is 2 km (1.2 mi) northeast of the nearest bank of the Nooksack River.

Nooksack shares Nooksack Valley School District with the nearby Sumas and Everson. The town is just a handful of buildings built around the State Route 9 highway that runs through it, and contracts the police and sewer services through the adjacent City of Everson. The post office lost its official status in 1992 (now a department of neighboring Everson) and the USPS has since closed the remote office, but the building still exists across from a small city park. Other noticeable remains are the two gas stations and several churches. It has no major geographic features except two small creeks that drains into the Sumas River on the edge of town, near a cemetery containing many old graves.

Nooksack after the fire. 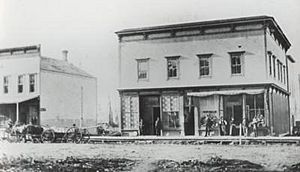 Nooksack was officially incorporated on December 6, 1912, and experienced much growth in its early years. It had a rail station, connecting it to the national train network. However, serious fires in the town in the early twentieth century caused most of the growth to halt.

According to the United States Census Bureau, the city has a total area of 0.71 square miles (1.84 km2), all of it land.

The climate in this area has mild differences between highs and lows, and there is adequate rainfall year round. According to the Köppen Climate Classification system, Nooksack has a marine west coast climate, abbreviated "Cfb" on climate maps.

There were 434 households, of which 49.5% had children under the age of 18 living with them, 66.4% were married couples living together, 11.3% had a female householder with no husband present, 4.6% had a male householder with no wife present, and 17.7% were non-families. 15.2% of all households were made up of individuals, and 5.5% had someone living alone who was 65 years of age or older. The average household size was 3.08 and the average family size was 3.37.

In February 2009 there was talk of merging Nooksack and Everson into a single city with a combined population of 3,819 (2010 census). On March 4, 2009, the Bellingham Herald reported a meeting of the Everson City Council to discuss such a merger, which was compared to the merger of four towns to form Bellingham in 1903. Names for the proposed new city include "Nooksack Valley".

Public education is provided by the Nooksack Valley School District. It operates one high school, one middle school, and three elementary schools that serve Nooksack, Everson, and surrounding areas.

All content from Kiddle encyclopedia articles (including the article images and facts) can be freely used under Attribution-ShareAlike license, unless stated otherwise. Cite this article:
Nooksack, Washington Facts for Kids. Kiddle Encyclopedia.