The Nooksack River is a river in western Whatcom County of the northwestern U.S. state of Washington, draining an area of the Cascade Range around Mount Baker near the Canada–US border.

The river proper begins with the merging of three main tributaries, namely the North Fork, Middle Fork and South Fork, near Deming. All three forks originate in the Mount Baker Wilderness, and the North Fork, the longest of the three, is sometimes considered the main river. The Nooksack is approximately 75 miles (121 km) in total length measuring from the North Fork headwaters. The lower Nooksack flows as a northerly loop through the fertile southern Fraser Lowland agricultural area before emptying into Bellingham Bay and, via the Strait of Juan de Fuca and the Strait of Georgia, communicates with the Pacific Ocean.

The North Fork Nooksack River rises at the Nooksack Cirque in central Whatcom County, north of Mount Shuksan in the western part of North Cascades National Park. Gathering melt water off of East Nooksack Glacier, it flows generally west, passing north of Mount Baker. For most of its course the North Fork is paralleled by State Route 542 (also called the Mount Baker Highway).

Flowing west from the Nooksack Cirque, the river picks up large creeks such as Price Creek, a short creek draining Price Lake, as well as Ruth Creek, before flowing under the uppermost highway bridge. 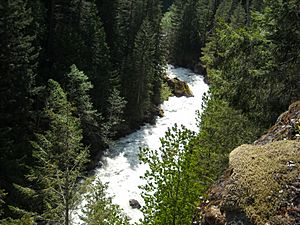 Looking down at the raging North Fork Nooksack River from the Mount Baker Highway, which, at this location, sits atop a 200-foot cliff that drops almost straight into the river. This location is just upstream from Nooksack Falls.

At Nooksack Falls the river flows through a narrow valley and drops freely 88 feet (27 m) into a deep rocky river canyon. The falls are viewable from the forested cover near the cliff edge. A small parking lot nearby contains a kiosk with information about the falls and a hydroelectric project.

Continuing to flow west, the North Fork receives several tributaries including Wells Creek, which joins the river right at the base of the falls as well as Glacier Creek, and Canyon Creek, before the river turns briefly south. The Middle Fork and South Fork join within a few miles of one another. The Middle Fork joins first, creating the Nooksack River proper. The South Fork joins just east of Deming in the Nooksack Indian Reservation. 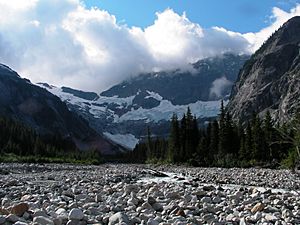 The traditional name of the North Fork in the Nooksack language is Chuw7álich ("the next point").

The traditional name of the Middle Fork in the Nooksack language is Nuxwt’íqw’em ("always-murky water").

The traditional name of the South Fork in the Nooksack language is Nuxw7íyem ("always-clear water").

After the Middle and South Forks join, the combined river flows northwest, emerging from the mountains and flowing past Everson and Lynden. Near Everson, the river is at risk of floods breaching the right bank, allowing flow into lower lands to the north, through Sumas River and into Canada. At Lynden the river turns southwest and then, near Ferndale, south, to enter the north side of Bellingham Bay at the Lummi Indian Reservation, approximately 3 miles (4.8 km) west of Bellingham.

The river is subject to flooding due to high rainfall amounts and some of the deepest snow packs in the country, sometimes triggered by a Pineapple Express, a weather pattern that brings central Pacific wind and rain to the northwest. One such storm flooded the city of Everson on November 7, 2006. 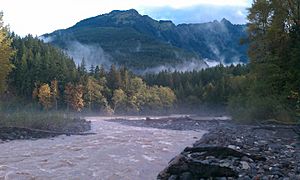 The river currently supplies the nearby town of Glacier with hydroelectric power from a dam near Nooksack Falls on the North Fork. The Middle Fork was also partially blocked with a diversion dam built by the City of Bellingham in the late 1950s for diverting water into Lake Whatcom, Bellingham's drinking water supply. As of July 2020, this old water diversion system has been modified to remove the dam and restore the river channel for the benefit of critical salmon spawning habitat.

In the late 19th century, most of the stream flow of the Nooksack River near its mouth flowed through the present channel of the short Lummi River to Lummi Bay, northwest of Bellingham Bay. Near the start of the 20th century, a log jam plugged the channel to Lummi Bay, forcing the river to change its channel to the present one. The accumulation of the new river delta has been an ongoing field of research regarding the new wetlands it has created while no longer resupplying the previous delta on Lummi Bay, except during high flow conditions.

All content from Kiddle encyclopedia articles (including the article images and facts) can be freely used under Attribution-ShareAlike license, unless stated otherwise. Cite this article:
Nooksack River Facts for Kids. Kiddle Encyclopedia.