The Lummi, and most of the other northwest coastal tribes included in the Point Elliott Treaty of 1855, were paid a total of $150,000 for their lands and paid an additional $15,000 in relocation costs and expenses. That would equate to over $4.2 million in economic power in 2013. The reservation has a land area of 54.378 km² (20.996 sq mi), which includes the Lummi Peninsula, and uninhabited Portage Island. The Lummi nation are the original inhabitants of the Puget Sound lowlands.

In pre-colonial times, the tribe migrated seasonally among many sites including Point Roberts, Washington, Lummi Peninsula, Portage Island, as well as sites in the San Juan Islands, including Sucia Island.

Many tribal members were Christianized in the late nineteenth century by the Catholic Oblate order.

The traditional lifestyle of the Lummi, like many Northwest Coast tribes, consisted of collecting shellfish, gathering plants, such as camas and different species of berries and, most importantly, salmon fishing. The Lummi developed a fishing technique known as "reef netting." Reef netting was used for taking large quantities of fish in salt water. Lummi had reef net sets on Orcas Island, San Juan Island, Lummi Island and Fidalgo Island, Portage Island and near Point Roberts and Sandy Point. Following steady increases in the number of individuals and firms fishing in areas traditionally fished by the Lummi nation, the nation fought for and gained limited protection under the law for the right to fish in their traditional manner.

From July 30 to August 4, 2007, the Lummi hosted their first potlatch since the 1930s, the Tribal Canoe Journeys Paddle to Lummi event. In a revival of traditional practice, 68 families paddled hand-made canoes to the Lummi Reservation from parts of Washington and British Columbia to celebrate the potlatch with other members.

The Gateway Pacific Terminal is a proposed export terminal at Xwe’chi’eXen (Cherry Point) in Whatcom County, Washington, along the Salish Sea shoreline. "Xwe’chi’eXen (Cherry Point) was an important village site for Lummi ancestors, and is considered culturally and historically significant to the Lummi people." On February 28, 2011, the environmental review process for the Gateway Pacific Terminal commenced when SSA Marine applied for state and federal permits to build the $500 million project. On the federal level, the Army Corps of Engineers is in charge of the environmental review process, and ultimately, the fate of the project. The proposed terminal would primarily export coal, and if constructed would be the largest coal export terminal in North America. The Gateway Pacific Terminal would include a 2,980-foot dock and allow up to 487 ships per year to berth.

The scale of the project resulted in protests by the Lummi Nation and other concerned parties in opposition to the construction of the terminal. The Lummi Nation argues that the construction of the Gateway Pacific Terminal violates their treaty rights under the 1855 Treaty of Point Elliot, which under Article 5 grants signatory nations "The right of taking fish at usual and accustomed grounds and stations is further secured to said Indians in common with all citizens of the Territory." Further, they argue the presence of the terminal could "irrevocably damage religious and sacred sites, such as Cherry Point, if the coal should spill." Previous requests for permits in the area, including for a proposed salmon fishery, have been rejected on similar grounds.

On June 1, 2011, more than 300 persons turned out for a hearing regarding the Gateway Pacific Terminal hosted by Mayor Dan Pike of nearby Bellingham, Washington. Many of the speakers opposed the terminal, citing varied concerns, including "health effects from coal dust and ship and locomotive emissions, climate change from the burning of exported coal in China, and reduced property values from railroad dirt and noise." Supporters of the project also spoke, with primarily members of local labor unions speaking in support because of potential employment opportunities. David Warren, a former president of the Whatcom County Labor Council, stated, "We've lost 3,500 to 4,000 jobs in the last several years in this area ... you can't say you're for jobs if you are against the industries that provide them."

On June 3, 2011 in the aftermath of the June 1 meeting, Mayor Pike announced his opposition to the Gateway Pacific Terminal project, stating "At this point, I don't think this community wants to see any coal, and I'm kind of with them on that," and critiqued the concerns over employment opportunities, stating "We cannot turn our backs on people who are struggling in this community, but that doesn't mean we take jobs at any cost."

In May, 2012, the Seattle City Council unanimously passed a resolution in opposition to the development of coal export ports in the region. This followed the passage of resolutions in opposition by smaller municipalities regionally, including Hood River, Oregon, and Camas, Washougal, and Marysville, in Washington.

In October 2012, a group of Native and non-Native fishermen gathered a fleet of boats in the waters around Xwe’chi’eXen to stand with the Lummi Nation in opposition. This action was supported by the leadership of the Lummi Nation, with Lummi Nation Chairman Cliff Cultee stating "We have to say ‘no’ to the coal terminal project ... it is our Xw’ xalh Xechnging (sacred duty) to preserve and protect all of Xwe’chi’eXen." Again, in October 2012, tribal leaders burned a mock million dollar to signify that they could not be bought out.

A December 2014 study by the Washington State Department of Ecology stated that the construction of the Gateway Pacific Terminal would cause an increase in potential oil spills, leading to environmental damage and disruption of traditional fishing grounds. The median amount of oil spills in the nearby Puget Sound is projected by the study to increase 26 percent, or an increase from approximately 10 to approximately 13 individual spills a year by 2019. The quantity of oil spilled in the area would increase 28 percent, from 656 gallons to 857 gallons.

On January 5, 2015, the Lummi Indian Business Council and the Lummi Nation sent a formal letter to the Army Corps of Engineer requesting a denial of the permit. The letter, signed by members of the Council and Chair Tim Bellew II, states "The proposed project will directly result in the substantial impairment of the treaty rights of the Lummi Nation throughout the Nations’ "usual and accustomed" fishing areas... The Lummi have harvested at this location since time immemorial and plan to continue into the future. The proposed project will impact this significant treaty harvesting location and will significantly limit the ability of tribal members to exercise their treaty rights... The devastating environmental impacts associated with this project, as well as the trust responsibility of federal agencies to ensure the protection of the treaty rights of the Lummi Nation, mandate the denial of any and all permits under the Corp’s jurisdiction."

On August 27, 2015, the Lummi Indian Business Council and the Lummi Nation sent a letter to the Army Corps of Engineers requesting an expedited decision on the status of the Gateway Pacific Terminal, stating "We remain committed to assisting the Corps in evaluating our request for a permit denial. However, we are not interested in engaging in a lengthy dialogue with the project proponent and do not anticipate the necessity of responding further." Additionally, the Lummi Nation announced on the same date that they were hiring Dentons, the world's largest law firm, to represent them in future lawsuits, indicating the Lummi are preparing for a fight in the courts over the Gateway Pacific Terminal.

These protests by the Lummi and others regarding the Gateway Pacific Terminal connect to regional struggles against fossil coal extraction and export by environmental groups and Native American organizations in the Pacific Northwest. In September 2012, the Affiliated Tribes of Northwest Indians, a congress of more than 50 tribes in seven states, passed a resolution demanding a broad environmental impact statement for all terminal projects regionally. Another regional protest against coal development in the Pacific Northwest by Native American groups was the Totem Pole Journey, the journey of a 22-foot totem pole through the region from Vancouver, British Columbia to Lame Deer, Montana. On August 21, 2015, the pole made a stop in Bellingham, Washington, for a blessing by the Lummi Nation at the Tribal Administration Center.

On May 9, 2016, the Army Corps of Engineers denied a permit to the project, citing the Lummi Nation's treaty-protected fishing rights.

The Lummi language (Xwlemi Chosen,) is a dialect of the North Straits Salish language. 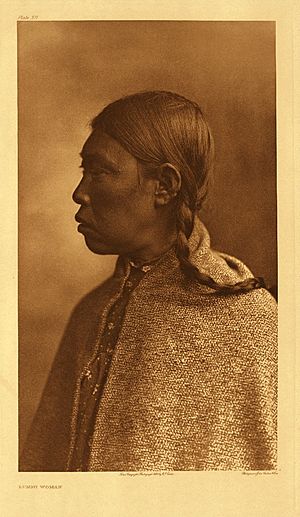 According to studies conducted by the Lummi Nation either on or near the reservation boundaries, enrolled Lummi tribal members have an average household size of approximately 4.5 persons.

61% of the adult population (ages 18–64) is employed. The labor workforce participation rate is 74%. The Lummi unemployment rate of about 25.1% is estimated to be three times the local average. The median monthly income for employed Lummi tribal members is approximately $2,000.

All content from Kiddle encyclopedia articles (including the article images and facts) can be freely used under Attribution-ShareAlike license, unless stated otherwise. Cite this article:
Lummi Facts for Kids. Kiddle Encyclopedia.