Lynden is the second largest town in Whatcom County, Washington, United States. Named and established in 1874 on the site of the Nooksack Indian village Squahalish (Nooksack: Sqwehálich), the town of Lynden began as a pioneer settlement headed by Holden and Phoebe Judson.

Lynden is approximately 5 miles (8.0 km) south of the Canada–US border, with Lynden-Aldergrove operation and port of entry hours between 8:00 a.m. and midnight. It is also located about 15 miles (24 km) north of Bellingham, and about 95 miles (153 km) north of Seattle. The population of Lynden is about 12,902 according to the United States Census Bureau. Residents of Lynden are known as "Lyndenites". Lynden is also home to the Northwest Washington Fair. 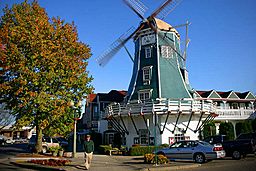 Lynden is home to the Lynden Lions, and The Lynden Christian Lyncs.

Lynden was begun in 1871 and established in 1874 by Holden and Phoebe Judson near the site of the Nooksack Indian village Squahalish (Nooksack: Sqwehálich). It was named by Phoebe Judson after the riverside town in Hohenlinden, a poem by Thomas Campbell, stating:

According to her book, A Pioneer's Search for an Ideal Home, she changed the spelling of "Linden" to be more visually appealing. The town was officially incorporated on March 16, 1891.

The town lies in a broad valley along the winding path of the Nooksack River, which empties into nearby Bellingham Bay. The surrounding area is filled with dairy, raspberry, strawberry, and blueberry farms. Even though not founded by them, the region saw significant Dutch immigration in the early and mid 1900s, spurring the growth of dairies. Today, Lynden pays homage to some of its Dutch heritage through locations such as buildings on Front Street, where some businesses have been made-over with a Dutch theme, complete with a windmill. Along that street, you'll find the Lynden Dutch Bakery, Dutch Mother's Restaurant, and numerous local businesses. Some local supermarkets contain Dutch food sections, but Dutch is spoken by very few of the town's residents today. In the last two decades, the population has nearly doubled in size, with Dutch being more predominate than other ethnic ancestry.(see 2010 census figures).

The Raspberry Festival is held the third weekend in July every year. The festival includes the Curt Maberry 3-on-3 basketball tournament, the Razz & Shine Car Show, The Raspberry Fun Run, tours of raspberry fields and wineries and the ever-popular Raspberry & Ice Cream All Day social and a rock wall. Other notable events are the Farmer's Day Parade, the Sinterklaas/Lighted Christmas Parade, the Antique Tractor Show, and many other events that can be seen in more detail at Lynden's website calendar.

The town is noted for its manicured lawns, Dutch architecture, and abundance of churches. In August, the Northwest Washington Fair lures over 200,000 people and allows Whatcom County residents to display their agricultural products, art, crafts, and wares. This regional fair is highly regarded as one of the best family friendly fairs in the state.

In 2005, Lynden gained renown for its infamous Lynden Drug Tunnel, built by a band of Canadian drug-smugglers in the basement of a residence 5 miles (8.0 km) north of Lynden along the Canada–US border.

Lynden is one of the few cities in the world whose main entrance is between two cemeteries., the town has had a long tradition of most businesses closing on Sunday. In recent years, businesses have started to open on Sundays, as in other communities, but the area remains mostly unchanged. A law prohibiting Sunday alcohol sales that was on the books for 41 years was repealed on October 20, 2008, due to changes in the population thinking concerning this matter as well.

In May 2016, the then-presumptive Republican Party nominee and eventual victor in the 2016 United States presidential election, Donald Trump, held a campaign rally in Lynden at the Northwest Washington Fairgrounds. This marked the first time that the presumptive presidential nominee of a major political party in the United States visited the city during campaign season.

The Nooksack River runs along a short portion of the city's southern border.

There were 4,594 households of which 32.7% had children under the age of 18 living with them, 60.1% were married couples living together, 8.1% had a female householder with no husband present, 2.6% had a male householder with no wife present, and 29.3% were non-families. 26.5% of all households were made up of individuals and 15.8% had someone living alone who was 65 years of age or older. The average household size was 2.57 and the average family size was 3.11.

There were 3,426 households out of which 34.5% had children under the age of 18 living with them, 62.8% were married couples living together, 7.9% had a female householder with no husband present, and 27.0% were non-families. 24.8% of all households were made up of individuals and 15.3% had someone living alone who was 65 years of age or older. The average household size was 2.60 and the average family size was 3.11.

Lynden has one sister city

All content from Kiddle encyclopedia articles (including the article images and facts) can be freely used under Attribution-ShareAlike license, unless stated otherwise. Cite this article:
Lynden, Washington Facts for Kids. Kiddle Encyclopedia.