Blaine is a city in Whatcom County, Washington, United States. The city's northern boundary is the Canada–US border. Blaine is the shared home of the Peace Arch international monument. The population was 4,684 at the 2010 census. Since Blaine is located right on the border with Canada, it is the northernmost city on Interstate 5, while the southernmost city is San Ysidro.

The area was first settled in the mid-19th century by pioneers who established the town as a seaport for the west coast logging and fishing industries, and as a jumping off point for prospectors heading to British Columbia's gold fields. Blaine was officially incorporated on May 20, 1890, and was named after James G. Blaine (1830−1893), who was a U.S. senator from the state of Maine, Secretary of State, and, in 1884, the unsuccessful Republican presidential candidate. The city has a "turn-of-the-century" theme, marked by remodeled buildings and signs resembling designs that existed during the late 19th century and early 20th century. 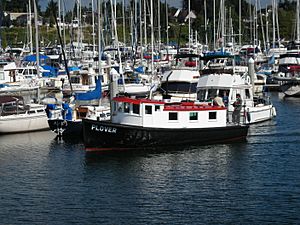 The MV Plover once conveyed workers to and from the cannery in the 1930s. Today it ferries tourists from Blaine to a resort on Semiahmoo Spit.

The world's largest salmon cannery was operated by the Alaska Packers' Association for decades in Blaine; the cannery site has been converted to a waterfront destination resort on Semiahmoo Spit. Several saw mills once operated on Blaine's waterfront, and much of the lumber was transported from its wharves and docks to help rebuild San Francisco following the 1906 fire there. The forests were soon logged, but Blaine's fishing industry remained strong and robust into the second half of the 20th century. Into the 1970s Blaine was home to hundreds of commercial purse seiners and gillnetters plying the waters offshore of British Columbia, between Washington State and southeast Alaska. Blaine's two large marinas are still home to hundreds of recreational sailboats and yachts, and a small fleet of determined local fishers provide visitors with dockside sale of fresh salmon, crab and oysters. Nature lovers have always appreciated Blaine's coastal location, its accessible bike and walking trails, and view of mountains and water. Birdwatchers across the continent have discovered the area's high content of migratory birds and waterfowl: Blaine's Drayton Harbor, Semiahmoo Spit and Boundary Bay are ranked as Important Birding Areas by the Audubon Society.

The Cains are the most notable family in Blaine's short history, credited with its founding and achievements. At one time owning most of present-day Blaine, the Cain brothers erected the biggest store north of Seattle, a lumber and shingle mill, a hotel (largest in the state at the time), the first public wharf, and donated large public tracts of land.

Nathan Cornish and family moved to Blaine in 1889. He became mayor in 1901; his platform was "twelve miles of wooden sidewalk". His daughter, Nellie Cornish, having failed to open a successful piano teaching business in Blaine, moved to Seattle, where she founded the Cornish College of the Arts in 1914, which still exists today.

During the formative years of her career in the 1950s, country singer Loretta Lynn was often a featured star at Bill's Tavern on Peace Portal Drive in Blaine. William Hafstrom owned the tavern; it no longer exists. Lynn was then living on Loomis Trail Road near Custer, Washington.

According to the United States Census Bureau, the city has a total area of 8.43 square miles (21.83 km2), of which, 5.63 square miles (14.58 km2) is land and 2.80 square miles (7.25 km2) is water. Blaine's motto is "Where America Begins": the community is also known as "The Gateway to the Pacific Northwest", and the "Peace Arch City". All these phrases are commentaries on Blaine's unique locale. It lies at the northernmost point of the north-south U.S. Interstate 5 and next to Drayton Harbor and Boundary Bay (the southward extension of Boundary Bay is officially named and often referred to as Semiahmoo Bay).

Blaine had a small airport, which was popular with light aircraft owners for its low fuel prices and because it had less fog than other nearby airports. The runway measured 2539 × 40 feet (774 × 12 m). The Blaine city government operated automated fuel pumps. In the spring of 2006 the city government removed several tall trees south of the runway as a safety precaution. Then in 2007, the City Council voted to close the airport before the end of 2008. The airport was officially closed on December 31, 2008. The land upon which the airport rests is adjacent to a shopping center and light industrial park. The area is now zoned for mixed use development, including light industrial manufacturing and commercial.

Blaine lies between the mountains east of Vancouver, the flatlands of Skagit County, Washington, the North Cascades (including Mount Baker), and the south end of Vancouver Island. The coastal climate of the area provides fairly mild weather from the rest of the Pacific Northwest. With annual precipitation of about 1000 mm (40 inches) and its milder location, Blaine enjoys more sunny days and a milder climate than neighboring communities.

Blaine is home to two main West Coast ports of entry between the United States and Canada. The Peace Arch Border Crossing, which is the northern terminus of I-5 and southern terminus of B.C. provincial Highway 99, serves as the primary passenger vehicle port of entry. The Pacific Highway Border Crossing, approximately one mile to the east, serves as the primary point of entry for heavy truck traffic, and thus is also known as the Truck Crossing. The latter is reached via Washington State Route 543 which departs I-5 on the south side of Blaine and connects at the border to B.C.'s Highway 15 (Surrey's 176th Street) and then to the Trans-Canada Highway.

Construction of a new Land Port of Entry (LPOE) was completed by the U.S. General Services Administration in 2011. A large public art installation entitled "Non-Sign II" was erected near the crossing booths. The art piece is a "blank space" in the shape of a billboard sign, surrounded by a mass of twisted metal rods. On the Canadian side, a new Port of Entry building was constructed by the Canada Border Services Agency. It was officially opened by Public Safety Minister Peter Van Loan on August 20, 2009. It was built partly to reduce delays for travelers coming to the 2010 Winter Olympics which were held in Vancouver and Whistler February 12–28, 2010.

International border intrigue has always been a part of Blaine's ambiance. Smuggling became an underground industry in 1919 with the passage of the Volstead Act banning liquor sale and use in the United States. Rum-running and border jumping thrived along Blaine's shared coastline with British Columbia, due in part to the area's largest whiskey still being located on Texada Island, which is located in the northern Strait of Georgia offshore from the city of Powell River, British Columbia. This continued until Prohibition was repealed in 1933 (coincidentally, the US Congressional law which re-legalized alcohol is named the Blaine Act). In subsequent decades, the situation was reversed due to restrictive drinking and entertainment laws in British Columbia, notably a ban on Sunday drinking, which led to Blaine and its sister border towns of Point Roberts and Sumas booming with taverns and adult entertainment of various kinds. Those days are long gone and now Blaine's retail sector booms for goods such as gasoline, dairy products and clothing outlets, as these goods are cheaper in the U.S. 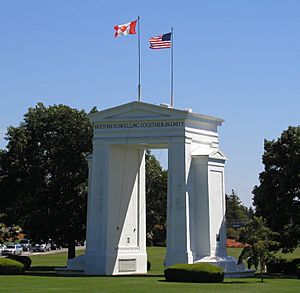 The Peace Arch is a monument on the Canada–US border, where I-5 becomes Hwy 99 and enters British Columbia.

With its location at the intersection of an international border, a major interstate freeway, and the Pacific Ocean, Blaine is frequently in the news. The International Peace Arch, dedicated September 6, 1921 by founder Samuel Hill, is located in Blaine in Peace Arch State Park and is occasionally used as a focal point for peaceful demonstrations and debate, such as the annual setting of crosses for each American killed so far in the Iraq War. But most of the people who visit or pass by the Park each year remember it for its beauty and peaceful shoreline setting (although the beach is not officially accessible from the park).

The Interstate 5 freeway extends from the U.S./Mexico border at San Diego, northward to Canada, and terminates in Blaine at the city's northern border. The country's only pedestrian crosswalk to cross an Interstate freeway exists in Peace Arch State Park, the Washington portion of the binational Peace Arch Park. The Canadian side of the park, designated as Peace Arch Provincial Park, is in Douglas, the Canadian port-of-entry and part of the city of Surrey, British Columbia. The Peace Arch monument, located in the Park, symbolizes lasting peace and amity between the U.S. and Canada. One innovative feature that has never been abrogated even during the days since 9/11 is that people entering the Park from either side may have the unique experience of strolling to the opposite park's boundary amid flowers, ponds, and works of art, without having to go through Immigration, thus truly making the Park a place of bi-national mingling. Frequently, wedding ceremonies are performed in the Park.

In 2006, a local group called the Blaine Peace Alliance unsuccessfully solicited City Council support to formalize a sister-city relationship with Pugwash, Nova Scotia, where promotion of world peace had been an ongoing effort for 50 years. Because Pugwash affiliated itself with the Pugwash Conferences on Science and World Affairs, the Council ruled such a connection would be "political". Shortly thereafter, the Alliance disbanded.

Since 1937, an annual celebration known as "Hands Across the Border" has been held at the Park, sponsored by the International Peace Arch Association. Hundreds of Scouts from the U.S. and Canada are in attendance and the highways and Ports of Entry on both sides of the border are closed for several hours for the event. There is a procession of Troops and world flags through the Peace Arch, signifying Scout unity around the world. Speeches are made by honored Scouts from Washington and British Columbia, and State, Provincial and local dignitaries attend. On February 28, 2013, after 90 years, it was announced that Hands Across the Border has been cancelled.

There were 1,994 households of which 27.1% had children under the age of 18 living with them, 49.5% were married couples living together, 11.0% had a female householder with no husband present, 4.2% had a male householder with no wife present, and 35.3% were non-families. 30.1% of all households were made up of individuals and 12% had someone living alone who was 65 years of age or older. The average household size was 2.32 and the average family size was 2.85.

There were 1,496 households out of which 32.1% had children under the age of 18 living with them, 52.9% were married couples living together, 12.4% had a female householder with no husband present, 4% had a male householder with no wife present, and 30.7% were non-families. 25.5% of all households were made up of individuals and 10.1% had someone living alone who was 65 years of age or older. The average household size was 2.48 and the average family size was 2.96.

All content from Kiddle encyclopedia articles (including the article images and facts) can be freely used under Attribution-ShareAlike license, unless stated otherwise. Cite this article:
Blaine, Washington Facts for Kids. Kiddle Encyclopedia.