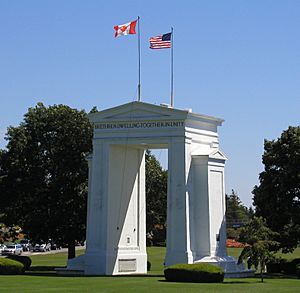 Peace Arch Park is an international park consisting of Peace Arch Historical State Park in the United States and Peace Arch Provincial Park in Canada. The park straddles the international boundary between the two countries at the extreme western end of the main contiguous section of the two countries' land border, between Blaine, Washington, United States, and Surrey, British Columbia, Canada, where it reaches Semiahmoo Bay of the Salish Sea on the continent's Pacific Coast. The park's central feature is the Peace Arch.

The park is located at the Peace Arch Border Crossing (also known as the Douglas Border Crossing), where Highway 99 in British Columbia and Interstate 5 in Washington State meet. The park's northern portion is about 9 hectares (22 acres) and is managed by the British Columbia Ministry of Environment. The southern portion is about 20 acres (8.1 ha) and is managed by the Washington State Parks and Recreation Commission.

Border inspection services at what is now known as the Peace Arch Border Crossing long predated the 1921 construction of the Peace Arch.

In a response to the COVID-19 pandemic, Canada–United States border has been shut down for non-essential travel on March 21, 2020. Initially, the parks on both sides of the border continued to open, allowing visitors from both sides of the border to gather at the park. However, as the number of park visitors continued to increase, the Canadian side of the park, Peace Arch Provincial Park, has been ordered to close since June 18, 2020.

Despite the closure of the Canadian side of the park, to get around mandatory Canadian public health and quarantine requirements, some visitors on the Canadian side continued to cross the border by directly accessing Peace Arch Historical State Park from 0 Avenue in Canada. Although the U.S. Customs and Border Protection is allowing Canadian visitors to remain in the American side of the park and return to Canada, Canada Border Services Agency requires anyone crossing the international border to report to CBSA to avoid potential penalties or charges. A Washington State immigration attorney has said "there's little Canadian officials can do to stop the foot traffic" due to the 1814 Treaty of Ghent, which stipulates that if barriers were erected at the boundary, the entire US-Canada boundary governed by the treaty would revert to its pre-treaty status.

Recreational activities include walking and picnicking as well as a playground for children. Visitors are allowed to explore both sides of the Canada–United States border inside the park, but are warned not to cross the boundary of the park to enter the adjacent country without being cleared to enter by the respective customs authority, as violators are subject to prosecution. Although no known cameras are in the park itself, United States Border Patrol agents in cars, on bikes, and on foot inside and steerable cameras on poles outside watch the park.

The International Peace Arch Association (IPAA) (formerly the United States Canada Peace Anniversary Association) is a nonprofit association dedicated to the heritage and preservation of the international monument. The association hosts park events and activities including the annual International Sculpture Exhibition, which highlights the work of American and Canadian artists.

All content from Kiddle encyclopedia articles (including the article images and facts) can be freely used under Attribution-ShareAlike license, unless stated otherwise. Cite this article:
Peace Arch Park Facts for Kids. Kiddle Encyclopedia.