American Border Peak is a mountain just south of the Canada–United States border, in the North Cascades of Washington state, with a corresponding sister peak, Canadian Border Peak, just north along a col connecting to it across the border. It is located within the Mount Baker Wilderness, part of the Mount Baker-Snoqualmie National Forest, near North Cascades National Park. It is notable for its large, steep local relief; however its somewhat rotten rock makes it less appealing to climbers than nearby Slesse Mountain. 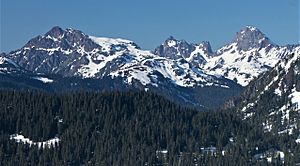 Most weather fronts originate in the Pacific Ocean, and travel northeast toward the Cascade Mountains. As fronts approach the North Cascades, they are forced upward by the peaks of the Cascade Range, causing them to drop their moisture in the form of rain or snowfall onto the Cascades. As a result, the west side of the North Cascades experiences high precipitation, especially during the winter months in the form of snowfall. Due to its temperate climate and proximity to the Pacific Ocean, areas west of the Cascade Crest very rarely experience temperatures below 0 °F (−18 °C) or above 80 °F (27 °C). During winter months, weather is usually cloudy, but, due to high pressure systems over the Pacific Ocean that intensify during summer months, there is often little or no cloud cover during the summer. Because of maritime influence, snow tends to be wet and heavy, resulting in high avalanche danger. 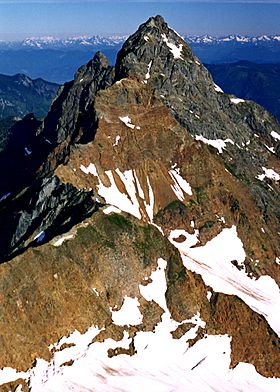 All content from Kiddle encyclopedia articles (including the article images and facts) can be freely used under Attribution-ShareAlike license, unless stated otherwise. Cite this article:
American Border Peak Facts for Kids. Kiddle Encyclopedia.