Mount Larrabee is a 7,865-foot (2,397-metre) Skagit Range mountain summit situated 1.4 mile south of the Canada–United States border, in the North Cascades of Washington state. It is located immediately southeast of American Border Peak within the Mount Baker Wilderness, which is part of the Mount Baker-Snoqualmie National Forest, and near North Cascades National Park. It is notable for its reddish coloring caused by oxidation of Iron in the rock. The rock consists of reddish interbedded and interfolded phyllites and greenstone. Originally known as Red Mountain, the name was changed in 1951 to honor Charles F. Larrabee (1895–1950), of the prominent Larrabee family of Bellingham, Washington. The name was officially adopted in 1951 by the U.S. Board on Geographic Names.

Mount Larrabee can seen from the Mt. Baker Highway near Heather Meadows and Artist Point, as well as from points in the Fraser Valley in Canada. On Larrabee's east ridge are a series of jagged spires called The Pleiades. Larrabee's northwest ridge connects to American Border Peak. Precipitation runoff on the west side of the mountain drains into Tomyhoi Lake and Tomyhoi Creek, whereas the east side of the mountain drains to Silesia Creek. An unnamed glacier known colloquially as Larrabee Glacier lies below the steep north face. Downslope of that glacier is the Boundary Red Mountain Mine where gold was discovered in the early 1900s. The Gargett Mine was located on the southwest slope north of High Pass, but it didn't produce quality ore and was abandoned. 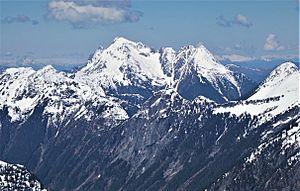 Most weather fronts originate in the Pacific Ocean, and travel northeast toward the Cascade Mountains. As fronts approach the North Cascades, they are forced upward by the peaks of the Cascade Range, causing them to drop their moisture in the form of rain or snowfall onto the Cascades. As a result, the west side of the North Cascades experiences high precipitation, especially during the winter months in the form of snowfall. Because of maritime influence, snow tends to be wet and heavy, resulting in high avalanche danger. Due to its temperate climate and proximity to the Pacific Ocean, areas west of the Cascade Crest very rarely experience temperatures below 0 °F (−18 °C) or above 80 °F (27 °C). During winter months, weather is usually cloudy, but, due to high pressure systems over the Pacific Ocean that intensify during summer months, there is often little or no cloud cover during the summer. The months July through September offer the most favorable weather for viewing or climbing this peak. 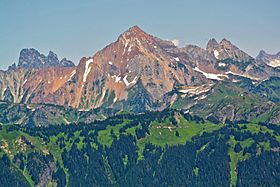 Larrabee centered with the Pleiades to right, and the top of Slesse Mountain showing behind the ridge to left

All content from Kiddle encyclopedia articles (including the article images and facts) can be freely used under Attribution-ShareAlike license, unless stated otherwise. Cite this article:
Mount Larrabee Facts for Kids. Kiddle Encyclopedia.