Eliza Island is located in the western part of Bellingham Bay in the U.S. state of Washington. It lies just east of the southern part of Lummi Island, in Whatcom County. Eliza Island has a land area of 0.571 km2 (0.220 sq mi; 141 acres). Its population was ten persons as of the 2010 census[update]. 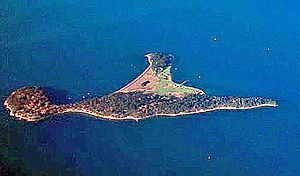 The island was named by Charles Wilkes during the Wilkes Expedition of 1838-1842. One of the few names given by Wilkes that does not honor either members of his crew or American naval officers, Eliza refers to Francisco de Eliza, the Spanish commander of a 1791 expedition to the Pacific Northwest. Wilkes may have named the island for his daughter or his sister, both named Eliza.

The south end of Eliza island is home to commercial and recreational crabbing.

Eliza Island has a small airstrip that can only be used during daylight hours, and one dock which is used strictly for loading and unloading. It is a private island with only about three people who live there year-round. Private generators provide electricity, and a water desalinization system is used to provide water to the residents. Only people who are 55 or older or disabled are allowed to use motor transportation such as a John Deere Gator or golf cart; everyone else can only go by foot or perhaps by bicycle. A designated swimming beach on the south side of the island is sandy and somewhat shallow.

All content from Kiddle encyclopedia articles (including the article images and facts) can be freely used under Attribution-ShareAlike license, unless stated otherwise. Cite this article:
Eliza Island Facts for Kids. Kiddle Encyclopedia.