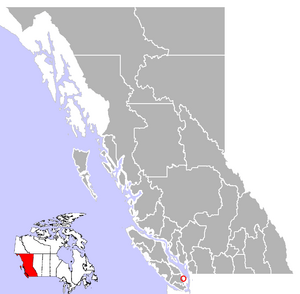 Crofton is a town on Vancouver Island, in British Columbia, Canada. It is a small town with only 2,500 people living in it. Crofton lies alongside the water. A miner named Henry Croft founded the town in 1902 so he could do better mining on the mountains around Crofton. But soon after, the mining stopped. In 1956, a mill that makes paper was built in Crofton. Today, that mill has over 1,000 workers. Because Crofton is on the water, it has a ferry that takes people to Salt Spring Island, which is nearby.

All content from Kiddle encyclopedia articles (including the article images and facts) can be freely used under Attribution-ShareAlike license, unless stated otherwise. Cite this article:
Crofton, British Columbia Facts for Kids. Kiddle Encyclopedia.