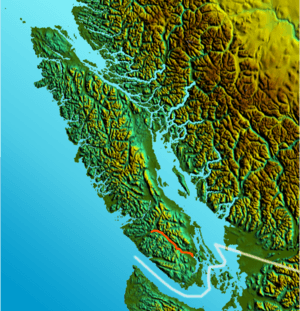 The Cowichan River /ˈkoʊ.ɪtʃən/ is a moderately sized river on Vancouver Island, in British Columbia, Canada. It originates in Cowichan Lake, flowing east towards its end at Cowichan Bay. Its drainage basin is 795 square kilometres (307 sq mi) in size.

The Cowichan River is popular in the summer for river tubing. People float from the weir to Little Beach which takes around two and half hours.

About 7 kilometres (4.3 mi) after exiting Cowichan Lake, the river drops over Skutz Falls, a small waterfall that is often visited when fish are climbing the fish ladder constructed beside the falls. Below the falls, in the summer time, are swimming areas. Downstream, the river flows through Marie Canyon, a popular kayaking run.

The river is widely considered one of the finest trout fishing streams in British Columbia. The Cowichan River is the centre of a provincial park, the Cowichan River Provincial Park, on southern Vancouver Island. The park area is home to hundreds of animal species: small and large mammals, including the native Vancouver Island ermine, an endangered species, and more than 200 species of birds.

The Cowichan River was nominated as a Canadian Heritage River in 1999 and designated in 2003. The river is also the namesake of Cowichan Herald Extraordinary at the Canadian Heraldic Authority.

In the decade leading up to 2014, water levels dropped considerably possibly due to climate change to the point where fish were trucked up the river and the Cowichan Valley Regional District instituted water restrictions for residents. Water from the river is used in the pulp and paper mill operated by Catalyst Paper in Crofton.

All content from Kiddle encyclopedia articles (including the article images and facts) can be freely used under Attribution-ShareAlike license, unless stated otherwise. Cite this article:
Cowichan River Facts for Kids. Kiddle Encyclopedia.