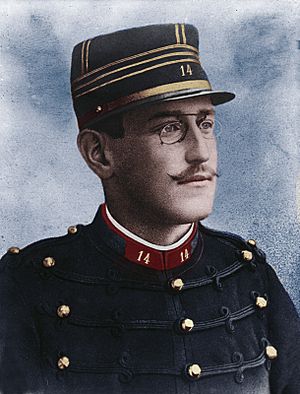 He was wrongly accused of treason against the French military. This scandal was known as the Dreyfus affair.

He was imprisoned on Devil's Island in French Guiana.

His highest rank was lieutenant colonel.

Dreyfus was born in Mulhouse and died in Paris.

All content from Kiddle encyclopedia articles (including the article images and facts) can be freely used under Attribution-ShareAlike license, unless stated otherwise. Cite this article:
Alfred Dreyfus Facts for Kids. Kiddle Encyclopedia.