Marie-Georges Picquart (6 September 1854 – 19 January 1914) was a French Army officer and Minister of War. He is best known for his role in the Dreyfus Affair.

Picquart was born in Strasbourg. He began his military career in 1872, graduating from the Ecole Spéciale Militaire de Saint-Cyr as fifth in his year. Picquart served as an infantry officer in France before seeing service in Indochina. He subsequently studied at the General Staff Academy (École d'État-major) where he was second in his class, after which he became a lecturer at the War Academy (École supérieure de guerre). One of his students at the latter institute was Alfred Dreyfus.

Picquart and the Dreyfus Affair

Picquart was then appointed to the General Staff in Paris. As a staff officer he acted as reporter of the debates in the first Dreyfus court-martial for the then Minister of War, Auguste Mercier, and the Chief of the Army General Staff, Raoul Le Mouton de Boisdeffre. Picquart was subsequently promoted to the rank of lieutenant-colonel on 6 April 1896.

He was appointed chief of the army's intelligence section (Deuxième Bureau, service de renseignement militaire) in 1895. The following year Picquart discovered that the memorandum ("bordereau") used to convict Captain Alfred Dreyfus, had actually been the work of Major Ferdinand Walsin Esterhazy. Several high-ranking generals warned Picquart to conceal his discovery, but Picquart continued his investigation. In this he was hindered and sabotaged by subordinate officers, notably Major Hubert-Joseph Henry. As a consequence, Picquart was relieved of duty with the Deuxième Bureau and sent in December 1896 to regimental duty, commanding the 4th Tunisian Tirailleurs Regiment (native infantry) based at Sousse in French Tunisia. 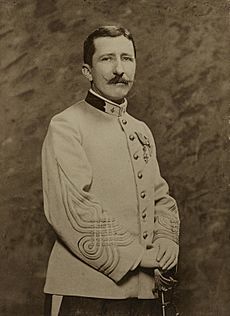 After the trial of Émile Zola for publishing his 1898 open letter J'Accuse…!, Picquart was himself accused of forging the note that had convinced him of Esterhazy's guilt. He was then arrested for forgery and was waiting for a court-martial, while the French Court of Cassation was reviewing the Dreyfus case. After the second court-martial, held as a consequence of the conclusions of the court, Picquart resigned from the army. However, the exoneration of Dreyfus in 1906 also absolved Picquart, who was, by an act of the French Chamber of Deputies, promoted to brigadier general. That was the rank that an officer of his seniority and experience could normally have expected to reach, if his career had not been interrupted by his involvement in the Dreyfus affair.

In 1906, Picquart entered Georges Clemenceau's first cabinet as Minister of War. He held that position for the entire duration of the Clemenceau Cabinet, from 25 October 1906 to 24 July 1909. Picquart then returned to military service as an Army Corps commander.

A keen amateur pianist, Picquart was a regular visitor to the Chaigneau family, whose daughters formed the Trio Chaigneau. He later helped arrange concerts for them.

While still a serving army officer, Picquart died on 19 January 1914 in Amiens from injuries sustained in a fall from a horse. He was 59.

All content from Kiddle encyclopedia articles (including the article images and facts) can be freely used under Attribution-ShareAlike license, unless stated otherwise. Cite this article:
Georges Picquart Facts for Kids. Kiddle Encyclopedia.