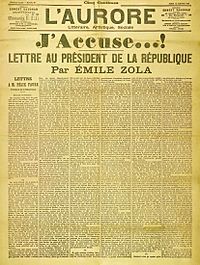 Emile Zola published a famous letter J'Accuse to complain that the government of France had been very unfair to Alfred Dreyfus.

The Dreyfus Affair was one of the biggest scandals in the history of France. It happened at the end of the 19th century. It was about Alfred Dreyfus, a Jewish officer in the French army.

In 1894, Dreyfus was accused of being a spy, and accused of crimes against France. People thought he wrote letters to the Germans telling them about secrets of the French army.

His punishment was to be sent to a prison island in South America for the rest of his life.

When he was in prison, people (mostly his brother Mathieu and a high-ranking officer called Picquart) thought he was innocent. They proved that another soldier, Major Esterhazy, was guilty. But the army did not want to admit that it had been wrong. They refused to free him. Finally, the evidence that Dreyfus was innocent became so strong that the government had to demand a new trial. At the new trial, the army again found him guilty. The President of France, who did not want an innocent man to suffer any more, pardoned Dreyfus in 1899.

Dreyfus was released. Seven years later, he was officially declared innocent, and allowed back into the army.

All content from Kiddle encyclopedia articles (including the article images and facts) can be freely used under Attribution-ShareAlike license, unless stated otherwise. Cite this article:
Dreyfus Affair Facts for Kids. Kiddle Encyclopedia.