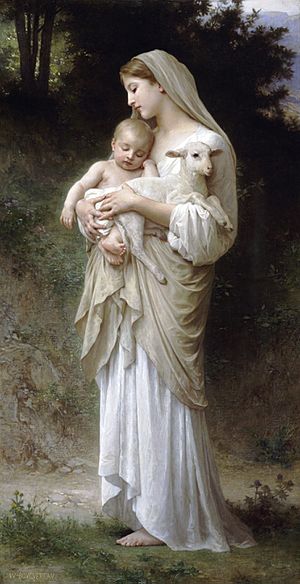 Bouguereau's L'Innocence: Young children and lambs are symbols of innocence

In relation to knowledge

Innocence can imply lesser experience. In contrast to ignorance, it is generally viewed as a positive term, an optimistic view of the world, in particular one where the lack of knowledge stems from a lack of wrongdoing.

People who lack the mental capacity to understand the nature of their acts may be regarded as innocent regardless of their behavior. From this meaning comes the usage of innocent as a noun to refer to a child under the age of reason, or a person, of any age, who is severely mentally disabled.

This is not the case anymore as technology advances, this has given children in the contemporary world a platform where they are referred to as 'digital natives', where they are seen more knowledgeable than adults. Furthermore, because of digital media and internet, young people have become well-informed of the world around and have a better understanding.

All content from Kiddle encyclopedia articles (including the article images and facts) can be freely used under Attribution-ShareAlike license, unless stated otherwise. Cite this article:
Innocence Facts for Kids. Kiddle Encyclopedia.