Mulhouse is a commune in Alsace in north-eastern France, in the Haut-Rhin department, of which it is a subprefecture. It is in the Grand Est region.

The commmune is in the historical and cultural region of Alsace, close to the Swiss and German borders.

Mulhouse dates back to the XIIth century. Medieval Mulhouse consists of an upper and a lower town.

Mulhouse is in the southern part of the plain of Alsace in the Haut-Rhin department. Two rivers run through Mulhouse, the Doller and the Ill, both tributaries of the Rhine.

The distances from Mulhouse to other cities are:

The commune of Mulhouse is surrounded by the communes Riedisheim, Rixheim, Morschwiller-le-Bas and Pfastatt.

The area around Mulhouse, at an altitude of about 270 m (890 ft), is characterized by climates with few extremes of temperature. The Köppen climate classification type for the climate at Strasbourg is a "Marine West Coast Climate" and of the subtype "Cfb".

The inhabitants of Mulhouse are known, in French, as Mulhousiens (women: Mulhousiennes).

Evolution of the population in Mulhouse 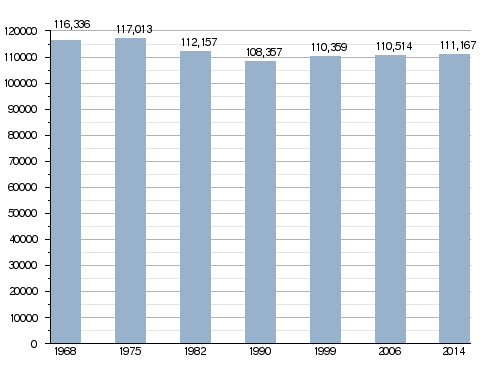 Mulhouse is a subprefecture of the Haut-Rhin department since 1857. It is the capital of the Mulhouse arrondissement and is also the administrative centre (French: chef-lieu) of 3 cantons:

It is part of the intercommunality Mulhouse Alsace Agglomération.

Mulhouse is twinned with:

All content from Kiddle encyclopedia articles (including the article images and facts) can be freely used under Attribution-ShareAlike license, unless stated otherwise. Cite this article:
Mulhouse Facts for Kids. Kiddle Encyclopedia.