Welk was born in Strasburg, North Dakota. Most people there spoke German, but also knew English. His parents were Ludwig and Christiana (Schwahn) Welk, who were ethnic Germans from Russia. They emigrated to America in 1892 from Selz, Kutschurgan District, in the German-speaking area north of Odessa (now Odessa, Ukraine, but then in southwestern Russia). In North Dakota, the family lived on a homestead.

Welk decided on a career in music and got his father to buy him an accordion from a mail order for $400 (equivalent to $4,255 in 2018)2018 He promised his father that he would work on the farm until he was 21, to pay his father back for the accordion. Any other money he earned during that time, by doing farmwork or performing, would go to his family.

On his 21st birthday, Welk left the family's farm to start his career in music. During the 1920s, he performed with the Luke Witkowski, Lincoln Boulds, and George T. Kelly bands before he started his own orchestra. He led big bands in North Dakota and eastern South Dakota. These included the Hotsy Totsy Boys and later the Honolulu Fruit Gum Orchestra. His band also played for radio station WNAX in Yankton, South Dakota. In 1927, he graduated from the MacPhail School of Music in Minneapolis, Minnesota. 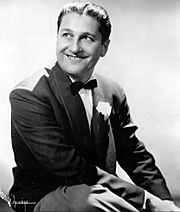 During the 1930s, Welk led a traveling big band that played dance tunes and "sweet" music. At first, the band traveled around the country by car. They were too poor to rent rooms, so they usually slept and changed clothes in their cars. At an engagement at the William Penn Hotel in Pittsburgh, a dancer said that Welk's band's sound was as "light and bubbly as champagne," which is where the term "Champagne Music" came from. Welk described his band's sound, saying "We still play music with the champagne style, which means light and rhythmic. We place the stress on melody; the chords are played pretty much the way the composer wrote them. We play with a steady beat so that dancers can follow it."

Welk's big band performed across the country but mostly at ballrooms and hotels in the Chicago and Milwaukee areas. In the early 1940s, the band started to play at the Trianon Ballroom in Chicago, where they played for 10 years. His orchestra also played at the Roosevelt Hotel in New York City during the late 1940s. Welk recorded a version of Spade Cooley's "Shame on You" with Western artist Red Foley in 1945. The record (Decca 18698) was #4 on Billboard's September 15 "Most Played Juke Box Folk Records" listing. From 1949 through 1951, the band had its own national radio program on ABC.

From 1938 to 1940, he recorded in New York and Chicago for the Vocalion label. He started with Decca in 1941, and recorded for Mercury and Coral before starting with Dot in the early 1950s.

In 1966, his orchestra recorded an album on the Ranwood Records label, with Jazz saxophonist Johnny Hodges, featuring a number of Jazz standards, including "Someone to Watch Over Me", "Misty" and "Fantastic, That's You". The album has been out of print for many years.

In 1951, Welk moved to Los Angeles. The same year, he began hosting The Lawrence Welk Show. It was broadcast from the Aragon Ballroom in Venice Beach. The show became a local hit and was picked up by ABC in June 1955.

The show had a "bubble machine." Whenever the orchestra played a polka or waltz, Welk himself would dance with the band's female singer, called a "Champagne Lady" on the show. His first Champagne Lady was Jayne Walton Rosen (her real name was Dorothy Jayne Flanagan). Rocky Rockwell would usually sing novelty songs. Welk would also have one song each show where he would play an accordion solo.

Welk's show would rarely play current music, except as a novelty. On the December 8, 1956 show, the show did play two current songs. They were "Nuttin' for Christmas," and Elvis Presley's "Don't Be Cruel."

The songs on the show were mostly popular music standards, polkas, and novelty songs. Welk often danced with women from the audience.

Welk had very high quality musicians, including accordionist Myron Floren, concert violinist Dick Kesner, guitarist Buddy Merrill, and New Orleans Dixieland clarinetist Pete Fountain. He paid his regular band members very well, and it was common for them to stay with the band a long time. For example, Floren was the band's assistant conductor throughout the whole time the show was broadcast.

The show didn't only play big-band era music. During the 1960s and 1970s, for example, the show played music that was originally by The Beatles, Burt Bacharach and Hal David, The Everly Brothers and Paul Williams and others, but in a style his older viewers would like. The show was originally in black and white. It changed to color in fall 1965.

While it was on network television, The Lawrence Welk Show aired on ABC on Saturday nights at 9 p.m. (Eastern Time), but changed to 8:30 p.m. in fall 1963. From 1956 to 1959, it was also known as The Dodge Dancing Party, because Welk was also hosting another show called Top Tunes and New Talent on Mondays. ABC canceled the show in 1971, but it continued on 250 stations across the country until 1982.

Welk was an excellent businessman. He had investments in real estate and music publishing, and was a general partner in a commercial real estate development.

Welk had four US design patents:

Welk was a Roman Catholic and a daily communicant. 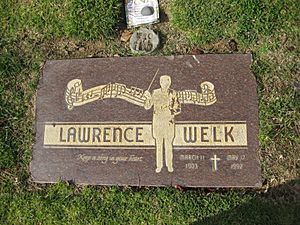 Welk died from bronchopneumonia in Santa Monica, California, in 1992 at age 89. He was buried in Culver City's Holy Cross Cemetery.

In 1994, Welk was inducted into the International Polka Music Hall Of Fame.

Welk has a star for Recording on the Hollywood Walk of Fame, located at 6613½ Hollywood Blvd. He has a second star at 1601 Vine Street for Television.

In 2007, Welk became a charter member of the Gennett Records Walk of Fame in Richmond, Indiana.

All books written with Bernice McGeehan and published by Prentice Hall (Englewood Cliffs, N.J.), except where indicated:

All content from Kiddle encyclopedia articles (including the article images and facts) can be freely used under Attribution-ShareAlike license, unless stated otherwise. Cite this article:
Lawrence Welk Facts for Kids. Kiddle Encyclopedia.