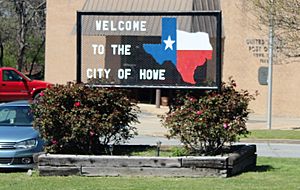 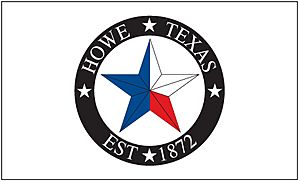 Howe is a town in Grayson County, Texas, United States. The population was 2,600 at the 2010 census. It is part of the Sherman–Denison Metropolitan Statistical Area 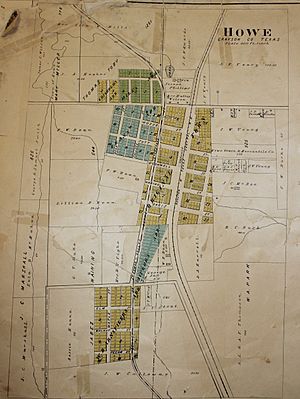 The first settlers in the area arrived around the time of the Texas Revolution in 1836. In 1843, it is said, the last Indian battle in Grayson County was fought in the area. The first settlers of Howe were Jabez and Harriet Haning, and Jabez's brother John. They received land through the Peters colony after their arrival from Pennsylvania before 1850. The Houston and Texas Central Railway built through the area in 1873, and a railroad switch was located in the community. It was called "Summit" because at 810 feet (250 m) above sea level it was supposed to be the highest point between the Red River and the Gulf of Mexico. In 1873, when Summit received a post office, two businesses were located at the switch: a general store and a saloon. Several houses were built to the east of the switch. Jabez Haning persuaded the railroad to establish a depot on his land by donating every second lot in his newly platted town to the railroad. The name of the depot, the store, and the post office was changed in 1876 to "Howe", after F. M. Howe, who worked for the Houston and Texas Central. Howe had three saloons until around 1900, when the town voted to go dry. Its first one-room school building opened in 1877 and was replaced by a two-story building in 1884.

In 1884, Howe was incorporated, with George M. McCrary as mayor. By the late 1880s the town had become a major grain-shipping center and was the home of Red Rust-proof Oats. A number of seed companies had their beginnings there in that decade. Howe became home to a Farmers' Alliance Cooperative Association, which was absorbed by the Howe Grain and Mercantile Company in 1894. In 1890 Howe had a population of 450, a steam gristmill, a Farmers' Alliance Cooperative, and Baptist and Methodist churches, as well as a number of hotels, doctors, druggists, and barbers. Several newspapers were published in Howe, such as the Howe Herald from 1890 to the 1910s and the Howe Messenger in the late 1930s and early '40s. During the 1930s the Howe Chronicle was published by former Governor James E. Ferguson and his brother A. M. Ferguson. The Howe Enterprise was established in 1963 by A.P. "Pop" Sloan.

By 1914 the Texas Traction Company, better known as the Interurban, was providing service to Howe. This electric train ran between Denison and Dallas with a stop in Howe. By 1914 Howe also had the Farmers National Bank, the Howe Herald, three grain elevators, and an ice plant. The community's population had grown from 521 in 1904 to 680 in the early 1960s. After that it rose rapidly through the early 1980s, reaching 2,173 by 1990. By 2000 the population was 2,478. Throughout most of its history Howe remained primarily an agricultural center, but some oil has been produced in the area. During the early 1980s Howe reported some thirty businesses. In 1981 local industries included a shirt manufacturer and a hydraulics company, and by 1991 the number of manufacturers at Howe had risen to five, including makers of plastics, electronics, and agricultural equipment. As of 2016, Howe has no grocery store.

According to the United States Census Bureau, the town has a total area of 4.2 square miles (11.0 km2), all of it land.

Howe's elevation of 860 feet (260 m) is the highest point along US 75 between the Red River and the Gulf of Mexico.

There were 924 households of which 44.5% had children under the age of 18 living with them, 56.5% were married couples living together, 15.4% had a female householder with no husband present, and 25.0% were non-families. 21.4% of all households were made up of individuals and 9.1% had someone living alone who was 65 years of age or older. The average household size was 2.68 and the average family size was 3.14. 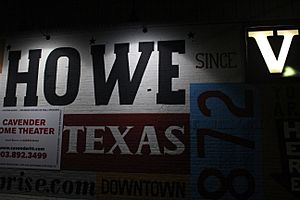 Howe's Victory Light is turned on immediately following each varsity Howe Bulldogs win during the regular season and playoffs. The light remains lit for the entire week leading up to the following week's Thursday games. It is turned off on Thursdays before games are played. The tradition began in 1977 by Bulldogs' Head Coach James "Blackie" Wade. It was formed by two simple light strips attached together with 19 light bulbs and was placed on the back of Bulldog Stadium's press box. The tradition was interrupted after the 1991 season when the "V" was replaced with a light box with the Bulldogs logo. The light box was never used as a victory light and would even be lit after losses. However, in 2007, the panel finally cracked and a V was replaced in 2008 and the tradition was fully restored. In 2014, Howe ISD constructed a new press box and the Victory Light was donated to an alumnus who hung the light at the four-way stop in the historic downtown district of Howe. The light which once was attached to a simple breaker in the press box is now controlled remotely and can be turned on immediately from a smart phone device from an out of town game. In 2015, the light was turned on 10 of 12 weeks, which is the most since its inception. 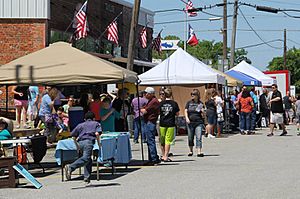 Howe celebrates its history and origins every May with a Founders Day celebration. The first Founders Day was in 1986 and featured a Pro Rodeo along with many festival events. Each year, vendors line up in the downtown parking spaces with items for sale. The festival features food, shaved ice, bounce houses, and things you would expect from a small town festival. It is a product of the Howe Area Chamber of Commerce. The city will celebrate the 30th Anniversary of Founders Day in on May 7, 2016 from 2pm - 8pm with live music the majority of the evening. There will also be dance performances, lawnmower race, horseshoe tournament and a Touch a Truck event.

All content from Kiddle encyclopedia articles (including the article images and facts) can be freely used under Attribution-ShareAlike license, unless stated otherwise. Cite this article:
Howe, Texas Facts for Kids. Kiddle Encyclopedia.