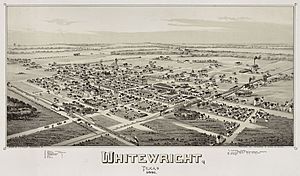 The Grayson County portion of Whitewright is part of the Sherman–Denison Metropolitan Statistical Area.

The settlement was established in 1878, when New York investor and financier William Whitewright Jr. (b. 1815 - d. 1898), after which the community was named, purchased a tract of land in the path of the Missouri–Kansas–Texas Railroad, which was then extending its tracks across the county from Sherman to Greenville. Whitewright had the land surveyed as a townsite and left two of his agents, Jim Reeves and Jim Batsell, to sell lots in the new community. Likely due to the combination of its rail connection and its location in the center of perhaps the richest farmland in the county near the headwaters of Bois d' Arc Creek, Whitewright soon attracted settlers and businesses.

Within ten years of its founding, the community had incorporated and supported a private school, Grayson College, a public school, a newspaper, and several businesses, including three hotels, two cotton gins, and two banks. Jas. A. Batsell served as the first postmaster beginning on April 8, 1878. In 1885, Peter McKenna took over as postmaster, and the facility was officially commissioned as the Whitewright post office on December 7, 1888.

By 1900 the population of Whitewright was 1,804. Although the population declined slightly, to 1,563 in 1910 and 1,666 in 1920, the business community flourished. By the mid-1920s both the Missouri-Kansas-Texas and the Cotton Belt served the town, and 68 businesses, including two banks and manufacturers of cottonseed oil and flour, operated locally. Whitewright served as a marketing, retail, and commercial center for the farmers of the surrounding area who produced such crops as cotton, wheat, and corn.

In June 1911, a fire which started in a trash pile and was fanned by high winds destroyed most of the Whitewright business district. Along with the fire station and city hall, 43 business were destroyed and 75 residences damaged, 27 of those destroyed. Units from the Denison and Sherman fire departments were called to assist, but the fire was reported under control before the Sherman department could get underway.

Whitewright was the home of US Lieutenant Joe Tom Meador, who after World War II looted several major pieces of art from a cave near Quedlinburg, Saxony-Anhalt, Germany. On April 19, 1945, American troops occupied Quedlinburg. Various treasures of art were secured in a cave near the castle Altenburg. Meador was responsible for the security of the cave. Meador, a soldier with good knowledge of art, recognized the importance of the treasures (among them being the Gospel of Samuel and the Crystals of Constantinople). He sent the treasures to Whitewright via army mail, and the art was placed in a safe at the First National Bank of Whitewright.

Meador died in 1980, and his heirs tried to sell ten pieces of Beutekunst (looted art) on the international art market. After a long search and judicial processes, the art was returned to Germany in 1992 and were investigated because of damages to the pieces. At first those stolen artifacts were exhibited in Munich and Berlin but were finally returned to Quedlinburg in 1993. However, two of the pieces stolen by Meador are still in the United States at an unknown location.

A 2007 documentary of ZDF showed the path of robbing the Treasures.

There were 650 households out of which 33.2% had children under the age of 18 living with them, 54.3% were married couples living together, 11.8% had a female householder with no husband present, and 29.8% were non-families. 26.3% of all households were made up of individuals and 12.9% had someone living alone who was 65 years of age or older. The average household size was 2.52 and the average family size was 3.04.

All content from Kiddle encyclopedia articles (including the article images and facts) can be freely used under Attribution-ShareAlike license, unless stated otherwise. Cite this article:
Whitewright, Texas Facts for Kids. Kiddle Encyclopedia.