Clements was born in Dallas and worked as an oil driller for many years. He studied at Southern Methodist University (SMU) but did not finish a degree. He founded SEDCO in 1947, which became the world's largest offshore drilling company. He entered politics as the United States Deputy Secretary of Defense under Presidents Richard Nixon and Gerald Ford. From 1975-1977 he worked under Defense Secretary Donald Rumsfeld.

On January 16, 1979, Clements replaced Democrat Dolph Briscoe as governor of Texas. He defeated State Representative Ray Hutchison in the Republican primary by a vote of 115,345 to 38,268. Clements won the November 1978 general election defeating Democrat John Hill. Hill had been the Chief Justice of the Texas Supreme Court and had been the Texas Attorney General for six years. Clements got 49.96% of the votes. With help from the votes of several minor candidates he narrowly won the election. Clements ran for reelection in 1982 but was defeated by Democratic Attorney General Mark White. People think that he lost votes because the economy was bad.

After being defeated, Clements was chairman of the board of governors of SMU in Dallas. He ran again in 1986 and won a primary against U.S. Representative Thomas Loeffler of New Braunfels and former Democratic turned Republican Congressman Kent Hance of Lubbock. At the election Clements defeated Governor White getting 52.7% of the votes.

His first term was marked by SEDCO's involvement in the then largest oil blowout in history, the Ixtoc I oil spill, which caused extensive environmental damage. Charlie Brooks, Jr., became the first prisoner to be executed by lethal injection (December 1982). Clements faced heavily Democratic state legislatures. In 1980, Clements changed the death penalty for Randall Dale Adams to life in prison. Adams was the subject of The Thin Blue Line, an Errol Morris documentary movie. Adams was found to be innocent in 1989 after serving twelve years in prison.

During his second term, Clements worked to reduce crime, improve education, and boost the Texas economy. He tried to improve relations with Mexico, especially on immigration and the War on Drugs. 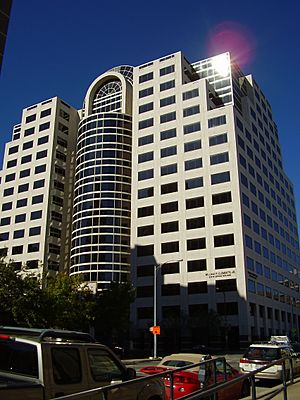 After leaving the governorship, Clements worked hard to help Republican candidates seeking office in Texas. He lived in Dallas with his second wife, Rita Crocker. She was later appointed to the University of Texas Regents by Governor George W. Bush. Clements was known for his acerbic, energetic personality, which Democrats hated but Republicans loved. In 1993, he unsuccessfully supported the conservative Congressman Joe Barton in a special election for the U.S. Senate. 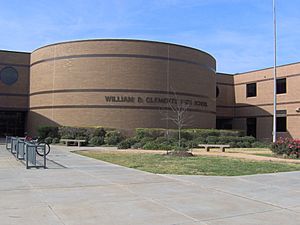 In 2006, Clements raised money for U.S. Senator John McCain to run for President.

In June 2009, Clements donated $100 million to UT Southwestern Medical Center, the largest civic donation in Dallas history. A high school in Sugar Land, Texas and a state office building in Austin, Texas are named in honor of Clements.

On Memorial Day weekend in 2011, Clements died at age 94 in a Dallas hospital from natural causes.

All content from Kiddle encyclopedia articles (including the article images and facts) can be freely used under Attribution-ShareAlike license, unless stated otherwise. Cite this article:
Bill Clements Facts for Kids. Kiddle Encyclopedia.