James Rodney Schlesinger (born February 15, 1929) was United States Secretary of Defense from 1973 to 1975 under presidents Richard Nixon and Gerald Ford. He became America's first Secretary of Energy under Jimmy Carter.

While Secretary of Defense, he opposed amnesty for draft dodgers, and pressed for development of more sophisticated nuclear weapon systems. Additionally, his support for the A-10 and the lightweight fighter program (later the F-16) helped ensure that they were carried to completion.

Schlesinger was born in New York City and educated at Horace Mann School and Harvard University. He taught economics at the University of Virginia and published The Political Economy of National Security. In 1963 he moved to the Rand Corporation, where he worked until 1969, in the later years as director of strategic studies. 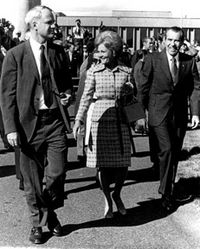 In 1969 Schlesinger joined the Nixon administration as assistant director of the Bureau of the Budget, devoting most of his time to Defense matters. In 1971 President Nixon appointed Schlesinger a member of the Atomic Energy Commission (AEC) and designated him as chairman. Serving in this position for about a year and a half, Schlesinger made many changes in an effort to improve the AEC's performance.

On February 2, 1973 he became Director of Central Intelligence. Although his CIA service was short, barely six months, it was stormy as he again made many changes to the organization. He became so unpopular at CIA Headquarters in Langley, Virginia that a security camera had to be installed opposite his official portrait because of fears that it would be vandalized. By this time he had a reputation as a tough, forthright, and outspoken administrator.

Schlesinger left the CIA to become Secretary of Defense on July 2, aged 44. Despite his youth, he was well-qualified for the post. As a university professor, researcher at Rand, and government official in three agencies, he had acquired an impressive background in national security affairs.

Dismissal as Secretary of Defense

Schlesinger's insistence on higher defense budgets, his disagreements with Congress on this issue, and his differences with Secretary of State Kissinger all contributed to his dismissal from office by President Ford in November 1975. 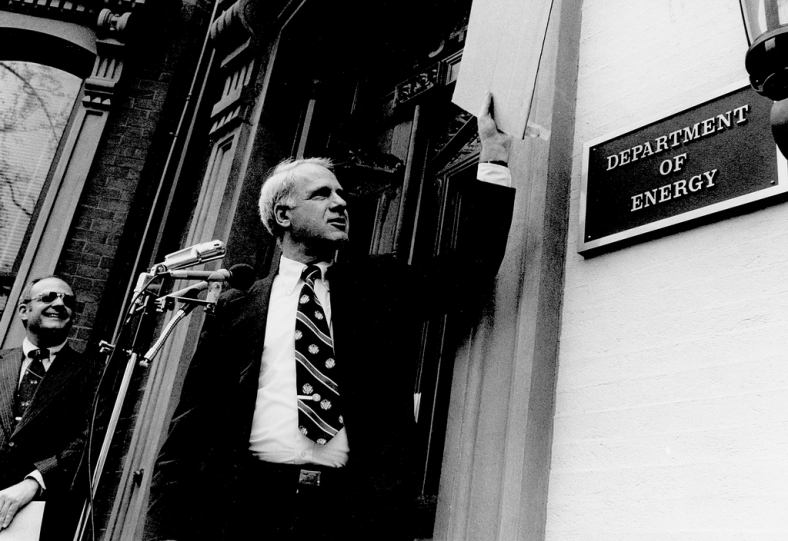 Schlesinger while serving as Energy Secretary

After leaving the Pentagon, Schlesinger wrote and spoke about national security issues and the need for the United States to maintain adequate defenses. When Jimmy Carter became President in January 1977 he appointed Schlesinger, as his special adviser on energy and subsequently as the first Secretary of Energy in October 1977. He launched the Department of Energy's Carbon Dioxide Effects and Assessment Program shortly after the creation of that department in 1977. In July 1979, Carter replaced him.

On June 11, 2002 he was appointed by U.S. President George W. Bush to the Homeland Security Advisory Council. He also served as a consultant to the United States Department of Defense, and was a member of the Defense Policy Board.

Schlesinger worked consistently with distinction long after his government and academic experiences, serving on numerous governmental advisory boards until only weeks before his death at the age of 85. He was buried at Ferncliff Cemetery in Springfield, Ohio.

All content from Kiddle encyclopedia articles (including the article images and facts) can be freely used under Attribution-ShareAlike license, unless stated otherwise. Cite this article:
James R. Schlesinger Facts for Kids. Kiddle Encyclopedia.